The reductions reached during the city's bankruptcy resolution go into effect this weekend. 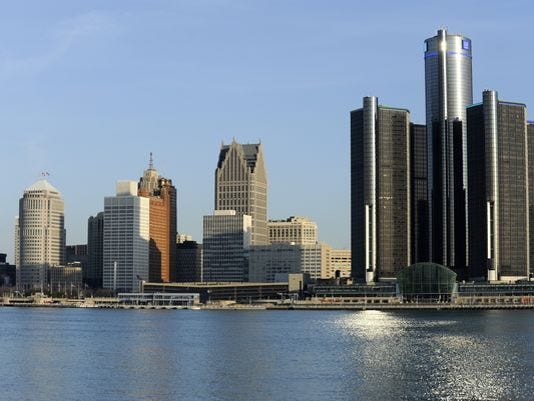 Detroit — Pension and benefit reductions reached through the city's historic bankruptcy will begin showing up in the monthly checks of Detroit retirees beginning Sunday.

The cuts affect an estimated 20,000 retirees in the city's two pension funds. They are outlined in a court-approved plan that allows the city to shed $7 billion in debt and invest $1.7 billion into restructuring and service improvements over the next decade.

"There have been a lot of accolades about the speedy exit from bankruptcy and applause for those involved in the settlements," Bruce Babiarz, a spokesman for the city's Police and Fire Retirement System, said in a statement Friday.

"While the celebrations of the bankruptcy exit may be winding down, the reality of reduced pension checks will take effect in March."

In all, 32,000 active and retired city workers are affected by the pension cuts and reductions in health care. Babiarz said it may be a "harsh reality for many living on fixed incomes."

Retired Detroit Health Department worker Walter Knall is expecting a reduction of about 30 percent, factoring in health care cuts and the recoupment of past interest earnings. He is among a group of retirees involved in a federal court appeal challenging the cuts.

"I'll see how much it actually affects things when I get my check next week," said Knall, a father of three who is still paying off his kids' education loans. "It really hurts a lot because it was something that I was counting on and I thought I was supposedly guaranteed. I will fight to the very end."

Under the city's plan, the pensions of police and firefighters are not being cut, but their annual 2.25 percent cost-of-living adjustment is reduced to about 1 percent.

General workers will endure a 4.5 percent base cut in pensions and the elimination of an annual cost-of-living increase.

In addition, the city will seek to recoup $239 million from the optional annuity savings fund accounts of some general retirees who were credited with interest earnings that exceeded the retirement system's actual investment returns.

To soften the blow for some, the state Treasury Department accepted one-time applications in December that will provide qualified retirees supplemental pension payments.

The Income Stabilization Fund was created to prevent retirees from falling below the poverty line as a result of the cuts. The program allocates $20 million over 14 years for retirees from either of the city's two pension funds.

To be considered, pensioners must be 60 or older and have an income that is at 140 percent of the 2013 federal poverty level.

For police and fire, 268 retirees or beneficiaries were deemed eligible for the monthly supplement of up to $58.

The General Retirement System had about 1,550 applicants who qualified. Of those, about 1,450 will begin receiving monthly payments of $1 to $180 this year, said Tina Bassett, a spokeswoman for the fund.

Bassett said the additional 100 or so eligible pensioners who do not qualify this year may be deemed eligible in future years based on changes in the federal poverty index.

"Our retirees and other members have made personal sacrifices and difficult decisions throughout this process and now are working to move forward on a stable path," she said.

Retired U.S. Bankruptcy Judge Steven Rhodes, who presided over the case, said during an event Wednesday he's "deeply concerned" about the unfunded pension liabilities for some cities.

The city used the bankruptcy process to slash its promised retiree health insurance benefits from $4.3 billion to $450 million.