The incident occurred around 4:45 p.m. Friday at the Marathon gas station 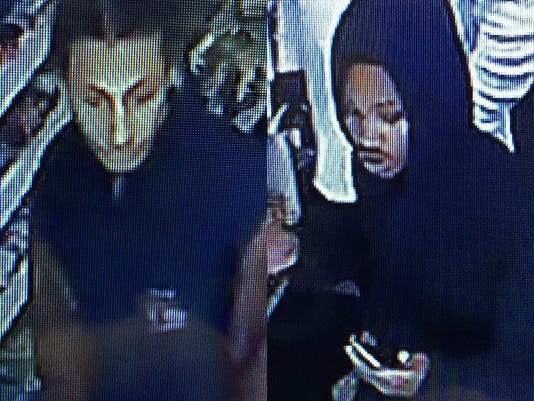 The suspects are described by police as two males, approximately 5-foot-7 to 5-foot-9 and around 20 years old.(Photo: Michigan State Police)

Inkster — Police are looking for two men suspected of shooting a man Friday during an attempted robbery outside a gas station.

The incident occurred around 4:45 p.m. Friday at the Marathon gas station at Avondale Avenue and Inkster Road, police said. Two suspects followed the victim into the parking lot where one suspect produced a black, semi-automatic pistol and attempted to rob the victim.

The victim attempted to flee and was shot once in the leg, police said. He was transported to a local hospital with non-life threatening injuries.

The suspects fled the scene on foot, police said. They are described by police as two males, approximately 5-foot-7 to 5-foot-9 and around 20 years old. The armed suspect was wearing a jersey-style jacket with brown sleeves and wore his hair in a ponytail, while the other man was wearing a black hoodie.

Police said the suspects are believed to live in the neighborhood.

State Police ask anyone with information to call Crime Stoppers at 1 (800) SPEAK-UP or the Michigan State Police tip line at 1 (877) 616-4677. Callers can remain anonymous.