“City wants to put this behind us,” mayor says of taped arrest of Floyd Dent 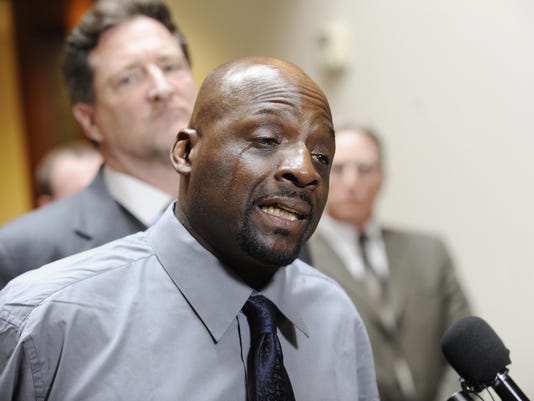 An emotional Floyd Dent tells his story about his beating arrest at a news conference in March. His attorney Gregory J. Rohl is in the background.(Photo: Clarence Tabb Jr. / The Detroit News)Buy Photo

The Detroit man whose arrest and beating by Inkster police was caught on video has settled with the city for nearly $1.4 million.

“We offered $1.37 million about a week or so ago,” Inkster Mayor Hilliard Hampton said Wednesday. “The city wants to put this behind us. I think this is a better way to go as opposed to a long, drawn out trial and litigation.”

The settlement comes more than four months after Floyd Dent, 57, was pulled from his vehicle by police during a traffic stop captured on video.

Nick Bennett, one of Dent’s attorneys, said the settlement is a good one.

“This is something both sides agree is a good settlement for both sides,” he said.

He also said his client was satisfied with the settlement.

“He’s a humble man of few wants in life,” Bennett said. “And there’s an aspect of putting it behind him. It’s been four months, but for him, it’s been a long time.”

Bennett said the settlement agreement is expected to be finalized in Wayne Circuit Court on Thursday.

“We have every confidence it will be accepted,” he said.

Meanwhile, the former police officer captured on video punching Dent during the traffic stop is also scheduled to appear in court Thursday.

William Melendez, 46, is expected to appear in 22nd District Court in Inkster for a preliminary exam. Melendez was charged last month with misconduct in office and assault with intent to do great bodily harm involving the arrest of Dent. If convicted, he faces up to 10 years in prison.

Melendez said he found cocaine on Dent, who was then charged with drug possession as well as resisting and obstructing. Both charges were later dismissed.

Vicki Yost, who was Inkster’s police chief at the time of the incident, resigned in April, quitting two days after Melendez was charged. Joe Thomas was named Inkster's interim police chief earlier this month. Thomas vowed to fix the department’s problems and the relationship with the community

Hampton said he believes the community can move beyond the incident.

“Definitely. This was not something that’s normal in the process and procedures of the Inkster Police Department,” he said. “This is an aberration as I see it.

“We trust this won’t be repeated,” Hampton said. “With proper training and screening of police officers, we hope this will never happen again.”