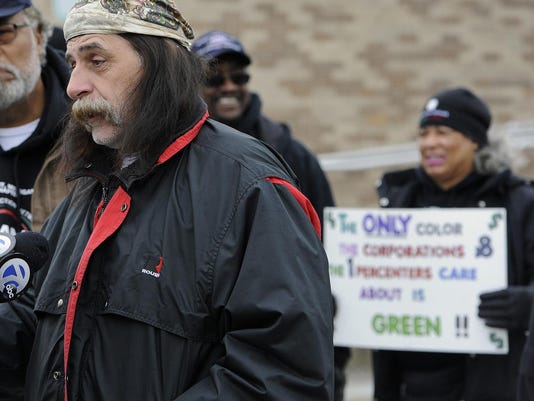 Nicholis Dunsky of Garden City talks about losing his home to tax foreclosure during a rally held Monday outside the city’s municipal offices.(Photo: Jose Juarez / Special to The Detroit News)Buy Photo

Several residents facing eviction from their homes, along with activists with the National Action Network, protested outside Garden City municipal offices Monday morning.

Residents are pleading with city officials to help them keep houses the city purchased this summer after they went into tax foreclosure. Garden City then sold the properties to a developer who will rehab and sell homes to new owners.

The protests follow tense City Council meetings, including one this month when Mayor Randy Walker blocked families from speaking at a public meeting because council members had a pizza party planned after the meeting.

“At the very least, there should have been some public debate and or direct correspondence from Garden City before they did this,” the Rev. Charles Williams II, president of the Michigan Chapter of the National Action Network, said in a press release. “These are tough times and you would think a local government would seek to help its resident not prey on them.”

A growing number of Wayne County suburbs are buying tax-foreclosed homes and reselling them in an effort to prevent absentee landlords from purchasing them at online tax auctions. Typically, foreclosure is triggered after three years of nonpayment.

But many homeowners said they were on payment plans and county officials led them to believe they had time to save their homes before the auction. Many said they weren’t aware they were sold until served with eviction notices from developers.

Another council meeting is scheduled for 7 p.m. Monday.