Seven-month-old Kaitlynn Groseclose of Hamtramck sits on the lap of her new mom, Michele Groseclose, during Adoption Day 2015, Tuesday, Nov. 24, 2015, in Coleman A. Young Municipal Center in Detroit. Adoptions will be finalized in counties across the state with the theme of Giving Thanks for Families. Adoption Day has become a holiday tradition, highlighting the importance of adoption and the needs of children in foster care. Bryan Mitchell, Special to The Detroit News
Fullscreen 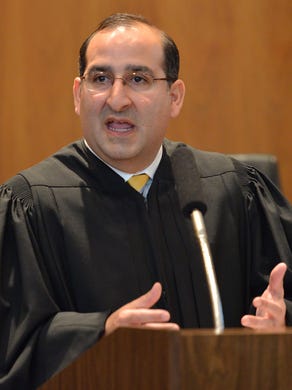 Savannah Blaine, 2, wiggles around in the arms of her mom, Elizabeth Blaine, as her adoption is finalized. Bryan Mitchell, Special to The Detroit News
Fullscreen

Eleven-month-old Ethan Clark of Southfield with his mom and dad, Jesse and Lori Clark. Bryan Mitchell, Special to The Detroit News
Fullscreen

Seven-month-old Kaitlynn Groseclose of Hamtramck takes her place with the Groseclose family. Bryan Mitchell, Special to The Detroit News
Fullscreen

Jackson Vanderhorst, 3, looks up at the judge as he stands next to his stepdad, Tyler Vanderhorst, who was finalizing his adoption. Bryan Mitchell, Special to The Detroit News
Fullscreen

Judge Frank S. Szymanski speaks about reading to his own children during Adoption Day 2015. Bryan Mitchell, Special to The Detroit News
Fullscreen

It's one big happy family as Tyler Tagai and Amanda Tagai hold onto their sons Matthew, 3, and Zachary, 5, during their Adoption Day court hearing. Daniel Mears/ Detroit News
Fullscreen

Jesse and Lori Clark of Southfield, with their 11-month-old son, Ethan Clark, were among four sets of parents who finalized adoptions Tuesday at the Coleman A. Young Municipal Center in Detroit.(Photo: Bryan Mitchell / Special to The Detroit News)Buy Photo

In foster care homes since the age of 4, Stephan Baker finally found a family a day before his 18th birthday.

Baker recounted Tuesday how happy he was to finally be adopted more than two years ago after pleading for parents for so long. He advised other children in the foster care system not to give up on their dreams of one day finding a loving home.

“There is a always a chance to be adopted,” Baker said during Wayne Circuit Court’s Adoption Day ceremony, one of 36 similar events at county courthouses across the state.

Baker and his mother, Beverly Baker, both of Livonia, were among the guests at the ceremony in the 13th floor auditorium of the Coleman A. Young Municipal Center.

Four sets of adoptive parents finalized their adoptions. Family members and friends looked on with broad smiles and tears.

The event was organized by the Wayne County Circuit Court and hosted by judges from the court’s family division.

“Love is one thing that the more you give, the more you have to give. You are a shining example of that,” Wayne Circuit Judge Frank Szymanski said.

Michigan Supreme Court Justice David Viviano told parents “there can be nothing more rewarding in this life than raising a child.”

Stephan was Beverly Baker’s 14th adoptive child. She said she oversaw workshops in which the teen consistently “presented” himself for adoption but no family came forward to make him one of their own. So, she said, she decided to adopt Stephan and has been happy about her decision ever since.

“He came (to adoption fairs) three to four years for someone to take him or he would be lost to the streets,” she recalled of her decision to adopt the older teen in 2013. “He would have been in jail or on the street begging. I wouldn’t let that happen so I took him myself.”

For Michele and Randy Groseclose, there was no doubt they were going to adopt 7-month-old Kaitlynn, the infant they had as a foster child since she was born.

“She had to have a loving family to grow up in,” said Michele Groseclose of Hamtramck as she cradled the infant while her three other children looked on proudly.

Jesse and Lori Clark, who adopted 11-month-old Ethan, said he’ll be able to celebrate his birthday Dec. 9 and Christmas as their legal child.

“I was really excited,” said Lori Clark of Southfield.

Family members huddled for photos to capture the historic day, many of them wiping away tears of joy.

“There are many more children that still need a home and look forward to a forever family,” said Larsen, looking at the families and children seated in front of her. “I look forward to seeing what these great kids will accomplish with your love and guidance — you are their role model.”

There are more than 13,000 children in foster care across Michigan. Adoptive parents in Oakland County on Tuesday included couples and single parents who have adopted other children. All agreed this Thanksgiving Day will be even more special.

“This has been a long journey and it’s very exciting,” said John Orner, who with his wife, Laurie, adopted 15-year-old DeMeterius.

The Beverly Hills couple have been the teen’s foster parents for 21/2 years, Orner said.

“Every time we adopt another, they get a jersey and a hat,” said Rebekah Pinchback, motioning to three boys, each 6 years old and a 2-year-old girl, Edith, adopted Tuesday.

“Edith has a biological brother we are planning on adopting as soon as possible,” Benjamin Pinchback said.