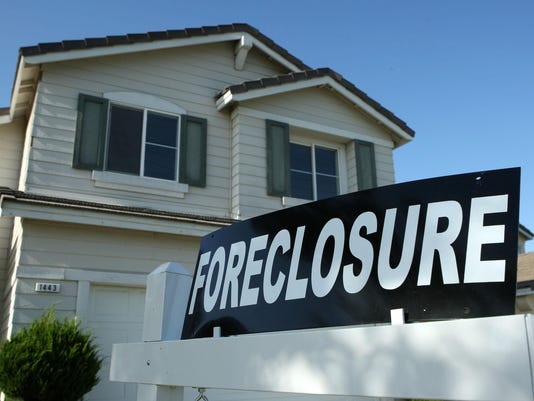 The developers generally buy the properties from the cities for the price of the unpaid taxes and are required to invest a certain amount in rehab costs.(Photo: Justin Sullivan / Getty Images)

Eighteen families on Monday sued the Wayne County Treasurer’s office and several Metro Detroit cities in U.S. District Court, arguing their properties were illegally foreclosed on and sold to developers.

The families are asking a judge to grant a temporary restraining order to prevent the developers from evicting them from properties in Garden City, Dearborn, Lincoln Park, Redford Township and the city of Wayne.

Attorney Tarek Baydoun, who represents the families, alleges the treasurer’s office led owners to believe they still had time to save their homes before the county foreclosure auction, while county officials worked with the cities to illegally take the homes.

Baydoun says the treasurer’s office failed to send out foreclosure notices by first-class mail, as it has in past years. And the contractor tasked with making personal visits to the homes to notify residents of the impending foreclosure never showed up, the complaint alleges.

Baydoun also says the county blocked his clients from signing up for payment plans that would have removed them from the threat of auction.

“County defendants recklessly, knowingly and/or maliciously engaged in a conspiracy to withhold the required notices and deny payment plans in a manner that was neither lawful nor rational,” the complaint states. “As a result, the plaintiffs and similarly situated individuals lost record title to their properties.”

Szymanski wrote in an email to The Detroit News on Monday morning that his office is clear with homeowners that not complying with payment plans could mean the loss of property.

“It is my firm belief that we acted properly in providing notice, explaining taxpayer options, and assisting as best we could in foreclosure avoidance,” Szymanski wrote. “It is indeed unfortunate that property is lost when taxes are not paid but such is the legislatively mandated process. It is not fair to those who do pay taxes to support government services that others receive those services when their taxes go unpaid.”

Calls and emails from The News to city officials involved weren’t immediately returned.

An official from Dearborn declined comment Monday, saying the city hadn’t been served with the lawsuit. After pleas to the City Council, the city resold several occupied tax-foreclosed homes to former owners this fall with restrictions.

A growing number of Wayne County suburbs are buying tax-foreclosed homes and selling them to developers, saying they want to prevent blight and discourage absentee landlords from acquiring the properties through the auction.

The auction is held in September and October for properties typically owing three years in unpaid taxes, but cities can take properties in July by exercising their right of first refusal. Taylor bought 106 properties; Lincoln Park, 90; Redford Township, 76; Dearborn, 35; and Garden City, 28, according to county records.

But many homeowners, who were on payment plans, said they weren’t aware the properties were sold until served with eviction notices from developers. Some acknowledged missing required payments but said county staffers led them to believe they had more time to save their homes.

Baydoun said he believes more than 1,000 property owners could have had property taken illegally by the county and given to cities. He is asking the U.S. District Judge Judith E. Levy to designate the case as a class action.

The controversy over the foreclosures exploded in November in Garden City when seven families, who wanted to plead their cased before its city council, were blocked from speaking at a public meeting. Mayor Randy Walker would later say he cut the meeting short because officials had a pizza party planned after that council meeting.

The developers generally buy the properties from the cities for the price of the unpaid taxes and are required to invest a certain amount in rehab costs. The developers keep any profits. The goal is to sell them to owner-occupants, city officials have said.

In the lawsuit filed Monday, Baydoun also named the three development companies who bought the homes from the cities.