Melendez gets 13 months to 10 years in motorist beating

Melendez gets 13 months to 10 years in motorist beating 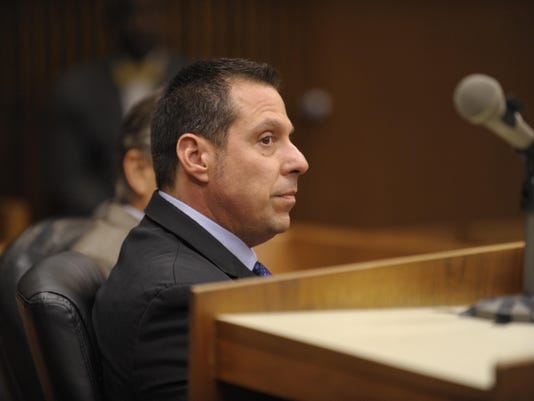 Former Inkster Police Officer William Melendez was sentenced to up to 10 years in prison Tuesday for the beating of an African-American motorist during a traffic stop last year.

The sentence applied to the assault with intent to do great bodily harm charge he was found guilty of in November. He was credited with 90 days spent in jail for a misconduct in office charge.

“He’s obviously disappointed. He’s not going to be there for his wife,” Thomas said after the lengthy sentencing hearing. “It’s a difficult time but he has the strength. I know he’s going to come through OK.”

Thomas said he plans to appeal but would not say on what basis, adding the sentence was “more than we asked for.”

Before his sentencing, Melendez, 47, spoke for the first time in court, saying: “To Mr. Dent and his family, I am truly sorry.”

Floyd Dent, whom Melendez was found guilty of beating in January 2015, said he felt Melendez’s punishment was proper and he felt bad the former cop would be away from his family.

Dent, 58, of Detroit, said he has no harsh feelings toward Melendez, who hit him in the head 16 times.

“I have no hatred against him whatsoever,” Dent said after the sentencing. “I wish him all the luck.”

Rohl said he hopes Melendez’s prison sentence sends a message to other officers.

“They’ll watch themselves better knowing they can go to prison,” Rohl said.

In sentencing Melendez, Evans told him his actions the night he beat Dent were excessive, cowardly and barbaric.

She said Dent must have been in disbelief, feeling he was targeted for the assault because of his race by a group of “angry and anxious” police officers who gave what appeared to be celebratory fist-bumps for the attack.

“The way you denigrated that man ... you think no one would care about a lone black man. Boy were you wrong,” Evans said. “You were so into your bravado that you forget the eye of justice was watching and recording it.”

Before handing down the sentence, Evans acknowledged some police officers are frustrated, working in cities with little funding and low pay of $15 an hour. “Police are human beings too.”

Evans also said incidents like the Dent beating could be avoided if government did a better job of funding its police departments and giving officers the resources they need to do their jobs.

“How do we as a community expect superior service by police officers making security guard wages,” she asked.

The Detroit Coalition Against Police Brutality released a statement saying, “The Coalition is gratified that former police officer William Melendez, who had similar allegations in the past when he was with the Detroit Police Department, has been sentenced by Judge Evans.

“Officers should not go from municipality to municipality to engage in misconduct and abusive practices and the decision of the jury in this case, combined with Evans’ sentencing, sends precisely the message that needs to be sent: police officers are servants of the people with one sole mission: to protect and serve.”

Earlier Tuesday, Dent said in a letter read by his niece Dynisha Smith: “We know I was innocent,” adding Melendez was his “judge, jury and executioner” that night.

Smith wore a T-shirt that read “Stop Police Brutality” as she read the note.

Dent, a longtime Ford Motor Co. employee, was hit 16 times in the head Jan. 28, 2015, during a traffic stop. Thomas, said his client said Dent had drugs on him and that was why he was stopped. He said while the beating was “obviously” brutal, it was a legal practice for police officers.

“Improper, predatory and illegal police conduct will not be tolerated,” she said. “The vast majority of police officers are hard-working law enforcers. Former officer Melendez was not one of them.”

A probation agent had recommended Melendez be incarcerated. But the information she obtained for her 30-page report, which she filed Dec. 2, came under fire and drew fiery questioning by Evans.

Eilea Murray told the judge she relied on information from a physician paid for by Dent’s attorney to make a decision Melendez be incarcerated for “life altering” brain injuries to Dent. Doctors at three area hospitals examined Dent and came to differing, but similar, conclusions about his injuries suffered from the blows to the head from being punched by Melendez.

Under stern questioning from Evans, Murray acknowledged she did not review Dent’s medical records. She said she also did not include information about 15 character letters of recommendation on behalf of Melendez. Murray told an angry Evans she did not see the letters before she made her report.

“Do you make recommendations when you don’t have all the information?” asked an angry Evans, who repeatedly grilled and admonished Murray about why she did not take more time with the report and why she didn’t make amendments.

Evans also asked Murray why she recommended $12,160 in out-of-pocket expenses for Dent’s attorney since there was a $1.4 million settlement reached last year by the city of Inkster and Dent.

Melendez, who was fired from the force after the beating incident, was convicted in November on assault and misconduct charges. Dent, who is African-American, was assaulted during a traffic stop on a dark Inkster street off Michigan Avenue. Melendez was acquitted of a third charge of strangulation.

Melendez showed little emotion when he was convicted by a jury. He did not take the stand in his own defense during the trial.

The graphic video of the traffic stop beating went viral on social media and sparked protests over police brutality. It was one of a number of cases around the country in which police were accused of abusing power during interactions with suspects, mostly African-American.

The incidents sparked a national debate on the issue of how much force by police officers is reasonable and whether white officers were treating black suspects more harshly.