Elizabeth Rathburn, 56, pleaded guilty to one count of wire fraud on Monday 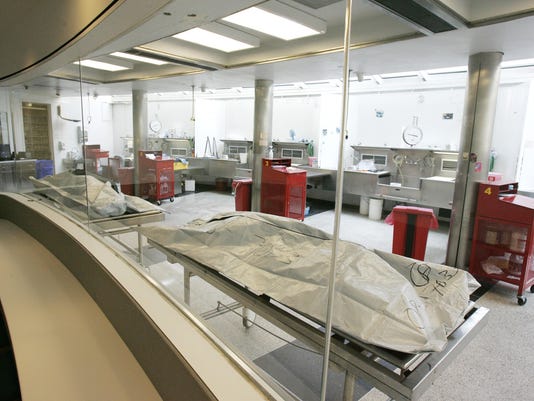 A Grosse Pointe Park woman pleaded guilty Monday in connection to an alleged black-market scheme involving the sale of body parts, some of which tested positive for HIV, hepatitis and other infectious diseases.

U.S. Attorney Barbara McQuade announced that Elizabeth Rathburn pleaded guilty to one count of wire fraud before U.S. District Judge Paul Borman and admitted to providing human remains to a customer, misrepresenting the parts were free of infectious diseases when she was knew they contained hepatitis B and HIV.

She faces 4-10 months in prison as part of the agreement but cooperation with prosecutors could get her a better sentence on July 18. She will pay $55,225.83 in restitution.

“She will assist the government with any knowledge that she has,” defense attorney Jeremy Henner said. “Her life has been ruined largely in part because of her association with Mr. Rathburn.”

Rathburn, 56, and her husband, Arthur Rathburn, 62, were the owners and operators of International Biological Inc., also known as IBI, and have been accused of renting human remains, including heads and torsos, with infectious diseases to unsuspecting customers who used the human body parts for medical or dental training, according to court records.

Arthur Rathburn’s case is pending, as is their divorce. He faces 20 years in prison for each of nine counts of wire fraud. He also faces five years on a charge of transporting hazardous material and five years for each of three counts of making false statements, according to the federal criminal complaint against him.

Authorities say the couple packaged and transported human remains in a fashion that could have exposed others to infectious diseases. The body parts, which included dismembered heads, were placed in freezers above pools of frozen blood. Other remains were transported inside trash bags stuffed in coolers.

The couple also allegedly sold whole bodies on the black market for $5,000, human heads for $500 and arms for $750, according to the criminal complaint against the Rathburns.

Elizabeth Rathburn’s plea agreement doesn’t specify whether she must testify against her husband, but she must cooperate with the government regarding her role in the alleged scheme, said U.S. Attorney’s Office spokeswoman Gina Balaya on Monday.

Arthur Rathburn allegedly dismembered bodies with a chainsaw, band saw and reciprocating saw “without using sanitary precautions,” according to the federal indictment. He then allegedly stored human heads by stacking them on top of each other without using protective measures.

In the 13-count federal indictment filed in January, prosecutors alleged Arthur Rathburn risked the health of others by shipping eight unembalmed human heads via the air carrier Delta Cargo.

The heads were packed only in trash bags and camping coolers. One of the heads was that of a person whom Rathburn was aware died from bacterial sepsis and aspiration pneumonia, federal authorities said. Large amounts of blood also were found in the coolers containing the human remains.

Arthur Rathburn also is charged with making three false statements about the shipment: claiming the infectious head was not hazardous material, that the heads had been embalmed and that blood found in the coolers was mouthwash.

Arthur Rathburn’s mortuary license was suspended by the state of Michigan two years ago, alleging he embalmed bodies at a Detroit address that didn’t have a funeral home license.

Raids on the couple’s home and business were conducted in December 2013. Thousands of human body parts and boxes of records were seized.

The couple’s alleged scheme was outlined in a federal search warrant affidavit unsealed in 2015 detailing a wide-ranging investigation in Michigan, Illinois and Arizona.