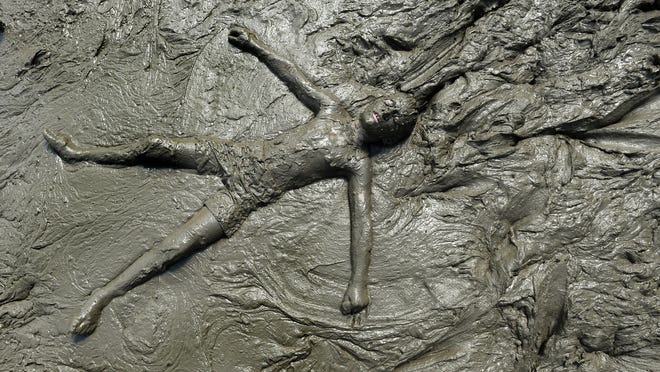 Westland — Hundreds of children escaped Tuesday's heat by racing around and wallowing in a giant mud pit erected in the Nankin Mills area of Hines Park.

The event marked the 29th year Wayne County Parks has hosted Mud Day, and this year did not disappoint. Park officials estimated that more than 2,000 children and teens attended the event where it’s OK to play in the mud.

Kenneth Nicholson, 31, of Inkster brought his children — ages 2, 9 and 12 — to the event for the first time. He said he was happy the event got his youngsters outdoors to play.

“This is good for the kids to get out of the house, put the tablets and iPhones down and come out here and get dirty,” he said.

While much of the event was children and parents playing in the mud, park officials organized various races, a limbo line and a game of tug-of-war in the muck. The mud pit was split into two sections: One for children ages 4 and younger, and the other for those 5 through 12.

“We don’t want our younger visitors to be competing with the older crowd or the teenagers, we want them to experience it for themselves,” said Beverly Watts, director of the Wayne County Parks Commission. “We want everybody to have safe, happy fun.”

Another Mud Day event is the naming of a “Mud King” and “Mud Queen.” This year’s honors went to Aidan Haas, 10, of Redford and Lilli Alcala, 10, of Dearborn.

Some kids wore goggles and were covered in mud from head to toe. The Western Wayne County Hazardous Materials Response Team was on site to hose the mud off with water.

“This is our training, our team training, and it’s perfect because we can’t do anything realistic. In the hazmat world, we can’t just release chemicals and have everyone go play in it, so we have mud instead,” said hazmat team leader Michael Magda.

Kristin Huskath, 33, of Wayne brought her four children — ages 1, 2, 7 and 9 — to the event. She said she plans to have them attend again next year, but she wishes the mud pit was larger.

Watts said making the pit bigger is a possibility.

“If we continuously grow this event in numbers, we’re going to have to increase the gallons of water and topsoil because we want to make sure that the pit is large enough to accommodate as many kids as want to come,” Watts said.