Police officers salute and stand at attention as the casket is carried to the hearse. Todd McInturf, The Detroit News
Fullscreen 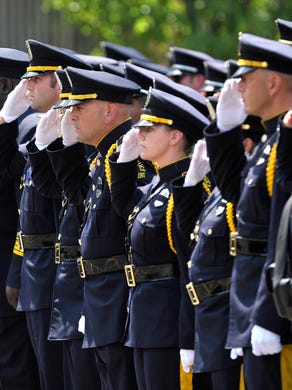 A line of Dallas police officers salute and stand at attention as the casket is carried to the hearse. Todd McInturf, The Detroit News
Fullscreen

The U.S. flag and the Thin Blue Line flag fly at Half-Staff in front of the church in honor of slain Dallas Police Officer Michael Krol. According to www.thinbluelineusa.com, "The Thin Blue Line represents the relationship of the police in the community as the protectors of the citizenry from the criminal element. It represents those men and women that are willing to give their life for the peace and harmony of the community they serve. To be an officer, it is no easy task. Everyday brings on new challenges, yet new opportunities do arise. You make arrests, patrol the streets, and do what no other citizen will ever do. You are the Thin Blue Line that will always stand strong, united, and exhibit true strength from within.” Todd McInturf, The Detroit News
Fullscreen

Detroit Chief of Police James Craig briefly talks to the media after the funeral. Todd McInturf, The Detroit News
Fullscreen

Detroit Chief of Police James Craig shows off a challenge coin and Dallas Police Department patch that he received from Dallas Police as his department also gave their department a few gifts at the funeral. Todd McInturf, The Detroit News
Fullscreen

Jane Riddle, 59, of Redford Township, pays her respects to the slain officer during the procession. Todd McInturf, The Detroit News
Fullscreen

Hundreds of police officers and reserve police officers, including members of the Center Line (MI) Department of Public Safety form the procession to the cemetery. Todd McInturf, The Detroit News
Fullscreen

A woman pins a blue police ribbon on the lapel of this police officer. Todd McInturf, The Detroit News
Fullscreen

Police officers salute and stand at attention as the casket of Dallas Police Officer Michael Krol is carried into the church. Todd McInturf, The Detroit News
Fullscreen

This 30-foot by 60-foot U.S. flag flies from Inkster's FD Ladder 6, left, and Livonia's FD Tower 1 on W. Chicago at Inkster. The procession will drive under this flag en route to the cemetery. Todd McInturf, The Detroit News
Fullscreen

Police officers stand at ease as they prepare to enter the church for the funeral mass. Todd McInturf, The Detroit News
Fullscreen

A line of police officers, including many from Dallas, Texas, salute and stand at attention as the casket is carried to the hearse.Police officers, elected officials, other EMS personnel and member of the public pay their respects to murdered Dallas Police Officer Michael Krol after his funeral mass at St. Robert Bellarmine Catholic Church in Redford Township, Tuesday morning. Police officers, family members and friends then process to the Holy Sepulchre Catholic Cemetery in Southfield.(Photo: Todd McInturf / The Detroit News)Buy Photo

Redford Township — They came from the other side of the country and from precincts all over Michigan.

Their police cruisers and motorcycles lined a street under a giant U.S. flag hoisted by two fire trucks.

And, with bagpipes playing, they marched single file into a tan brick church to bid goodbye to a comrade.

It was homecoming time Tuesday for Michael Krol, 40, a Michigan native who was one of five Dallas police officers killed during a protest earlier this month.

Hundreds of officers filled St. Robert Bellarmine Catholic Church for Krol’s funeral, spilling out into hallways and other rooms.

“He died doing what he loved to do and what was in his heart, which was to protect and serve others,” said Detroit Officer Derrick Knox.

It wasn’t just Krol’s brothers and sisters in blue who came to pay their respects.

Local residents didn’t know Krol but said they appreciated what he did for a living.

The residents, some holding flags and posters, lined the route from the church to Holy Sepulchre Catholic Cemetery in Southfield.

“Every day, they get up and protect us,” said Marge Gault, whose niece and nephew are police officers in Livonia.

Members of Michigan Concerns of Police Survivors, who have lost a loved one in the line of duty, passed out blue ribbons.

Krol, who hailed from Redford Township, moved to Dallas in 2007 to become a police officer.

On Tuesday, 100 officers from Dallas followed him back to Michigan for the sad farewell.

Craig said his department gave the Dallas police a gift, which he didn’t identify, while Dallas gave Detroit its police department coin and patch.

“It says we are one,” said Craig. “You touch one, you touch all. We stand with Dallas.”

During these turbulent times, it was important for people to take every chance to thank law enforcement officers for what they do, said Calley. “We want to stand with them and be there to show support for the family and show support to the officer and say, ‘I’m with you,’ ” he said.

Carla Garnes said Krol and her son were part of a group that did everything together.

She described the officer as pleasant and easygoing, and always had a smile on his face.

“We can only imagine what a selfless policeman he became, someone who could only help in a big way the people he served,” she said.

Nicole Gregory of Redford Township brought her two sons, carrying a “Blue Lives Matter RIP Officer Krol” sign to see the officers. “We want to show our support to the family and the policemen that protect us every day,” she said.

Bill Nagle, whose daughter was a Hazel Park officer, said he doesn’t understand what’s happening in the country these days.