One of the few remaining former Negro League home ballparks in the country, Hamtramck Stadium could be getting a boost next year as Gary Gillette and other members of the stadium preservation group work to restore the field. 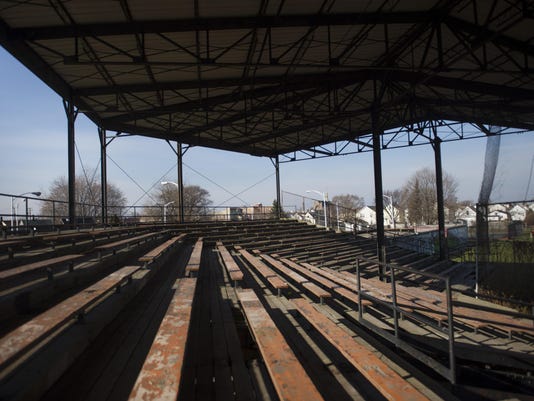 The historic Hamtramck Stadium was added to the National Register of Historic Places in 2012, and a historical marker was dedicated at the site in 2014.(Photo: Virginia Lozano / The Detroit News)Buy Photo

Hamtramck’s historic Negro League ballpark is getting $50,000 toward a plan for its redevelopment.

The National Park Service on Thursday announced the site is among close to 40 projects in more than 20 states sharing in about $7.7 million to preserve and highlight various sites and stories associated with the civil rights movement.

Congress appropriated funding for the new grant program in 2016 through the Historic Preservation Fund.

The grant is among several efforts in the works to fund redevelopment of Hamtramck Stadium on Dan Street off Jos. Campau.

Hamtramck city planner Melanie A. Markowicz said the city has been pursuing various funding opportunities for the stadium and the grant will go toward predevelopment work for the complete rehabilitation of the stadium and include a detailed conditions assessment, construction estimate, architectural plans and specifications.

“It is my hope that those who visit this site will make a personal connection to the past and the struggle for Equal Rights,” said Markowicz, who spearheaded the grant application, said in a statement provided to The News on Thursday.

The long-term goal of the rehabilitation is to reopen the stadium as a facility for multiple community uses including sports, movies and exhibition ballgames, the city said.

The stadium was added to the National Register of Historic Places in 2012 and a historical marker was dedicated at the site in 2014.

The city has owned the stadium since 1940 and has been coordinating with community stakeholders and groups, including the Friends of Historic Hamtramck Stadium.

Last month, the nonprofit friends group said it’s planning to launch a crowdfunding campaign in the first part of this year in hopes of raising $50,000 to restore the field. By June, the group intends to embark on a capital campaign to help repair brick structures, renovate the grandstand and replace bleachers.

The stadium was one of a few in the country custom-built for a Negro League team, the Detroit Stars, in 1930. Gary Gillette, who heads the nonprofit, said the field also was home to the Detroit Wolves, another Negro League team, and hosted high school baseball and football, community activities, concerts, boxing and soccer games.

Seventeen Baseball Hall of Famers played at the stadium, eight of them with either the Stars or the Wolves.

They included Norman “Turkey” Stearnes, a power-hitting center fielder who played a majority of seasons during his prime for the Detroit Stars at the stadium. Legendary pitcher Satchel Paige and slugger Josh Gibson also graced the Hamtramck field. The stadium was used for Negro League games from 1930-37.

“The City of Hamtramck is proud to bring new life to Hamtramck Stadium in the spirit of shared collaboration and partnership,” Hamtramck Mayor Karen Majewski said.