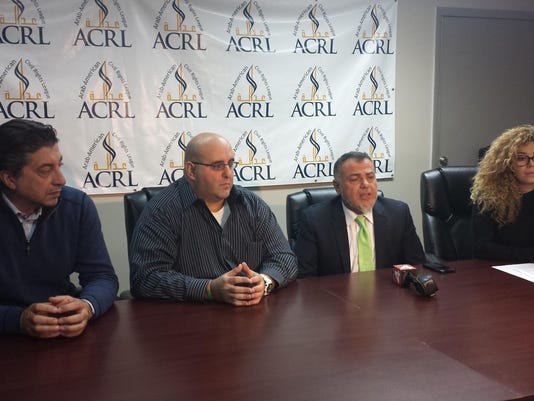 The Arab-American Civil Rights League, from left, Nasser Beydoun, chairman; complainant Haidar Abdallah; Nabih Ayad, attorney and founder of the ACRL, and Rula Aoun, director for the ACRL, announced Wednesday it has filed a complaint with the Consumer Financial Protection Bureau against Western Union regarding recent allegations of discriminatory practices.(Photo: Candice Williams / The Detroit News)Buy Photo

The Arab-American Civil Rights League’s complaint against the money transfer firm was filed after Haidar Abdullah “attempted to transfer funds to his spouse and children overseas” in Jerusalem, but was rejected by Western Union, which “requested additional verification information about his employment and financial background.”

The company, according to the civil rights league, “refused to provide any explanation or supplemental information related” to its decision, other than asserting its right to deny service to anyone.

Not knowing the reason behind the denial was worse than the denial itself, Abdallah told The News on Wednesday. The 39-year-old was trying to send money back to his wife and three children in Jerusalem in October when he learned the transfer was denied.

"I had to scramble" and find another way to send the money, Abdallah said, eventually choosing MoneyGram.

Abdallah said he learned about Western Union's apology "about two days ago" from his attorney. Asked if he'd go back to Western Union, now that the issue was officially resolved, he said: "No, not really. I've been using MoneyGram and I have no issues with them."

And while he describes himself as "satisfied" to get an apology, "I was hoping they'd say the reason why" he was denied in the first place.

"To have somebody deny me and make me feel like I’m suspect, that’s what angered me the most," Abdallah said. "That’s why I pushed; I did it to set a precedent so that in case it happens to someone else, it shows as a pattern. You don't just cut somebody off, without any proof they did anything wrong, and not give a reason."

ACRL director Rula Aoun said the organization considers the matter closed after the apology, but notes that Western Union never said "which fact or piece of information changed their minds." But the organization is happy to see Abdallah's ability to send and receive money through the company restored.

"We're happy it got resolved fairly quickly," Aoun said. "But if this is happening to others, we want to know about it, and our doors are open to take such complaints. If we see something of a repetitive nature occur, further action is possible."

At a news conference last month, Abdallah said he had been a Western Union customer since 2009, but in recent months his transfers ranging from $300 to $400 were rejected without explanation. Western Union requested additional information about Abdallah’s employment and financial background, but would not reinstate his transfer privileges.

So the league filed a complaint with the U.S. Consumer Financial Protection Bureau. In a statement Wednesday, the Arab-American Civil Rights League indicated that an apology from Western Union had resolved the matter.

The statement copied the language of Western Union’s apology: “After further review, Haidar Abdallah is now currently permitted to send or receive funds via the Western Union Money Transfer service. Quality service to our consumers is our primary concern at Western Union. My apologies for your overall experience and for the struggles you faced interacting with Western Union. Please be aware that discourteous treatment to our customers is neither excusable nor tolerated at Western Union.”

The narrative of the complaint was not made available on the CFPB’s website; no narratives accompany any complaints made against Western Union since mid-November. A spokesman for the bureau told The News that public complaints are opt-in, and that if the language of a complaint isn’t published, the bureau can’t share additional details.

Only two complaints from Michigan were made in December; only one complaint, lodged on Dec. 7, is from a Dearborn ZIP code. Both show as “closed with explanation,” but neither narrative is available.