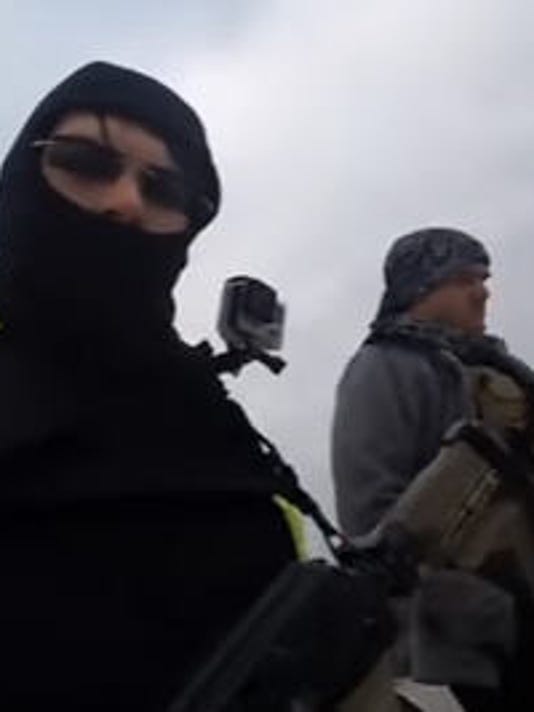 Two men were arrested Sunday after allegedly walking into the Dearborn Police Department wearing tactical vests and armed with cameras, an AP-14 and handgun.(Photo: YouTube screenshot)

Two men were arrested Sunday after police say they walked into the Dearborn Police Department wearing tactical vests and armed with cameras, an AP-14 and a handgun.

Video shot by one of the men shows a brief but tense standoff.

“Put it on the ground or you are dead,” one officer yelled during the chaotic scene. “I will shoot you.”

Another officer added his voice to the orders.

It began with a suspicious persons report and a nearby traffic stop.

Dearborn police were called Sunday afternoon to a shopping district near Ford and Southfield to investigate a report of “two suspicious men in a vehicle wearing tactical vests and masks,” officials said in a statement Monday.

The men left the area before officers arrived, but a police sergeant later spotted their vehicle in a park around three miles away. He conducted a brief traffic stop and did not see any visible weapons.

After being released, the suspects went to the police station to “make a complaint,” according to the video posted online.

“So we’re here, outside the Dearborn police station. We’re going to go in and make a complaint because we were illegally pulled over about an hour ago,” said a man identified by police as a 24-year-old resident of Leonard. “We felt a little afraid for our lives when we were pulled over, so we figured we better protect ourselves.”

The man, his face hidden in a mask and wearing sunglasses, held his camera out to reveal a large rifle strapped to his chest. Accompanying him was a 40-year-old Jackson resident who was unarmed, but also clad in a tactical vest with cameras rolling.

Police have not named either suspect. They were free Monday on $1,500 bonds, but officials did not disclose charges they face.

Reached by phone Monday night, the Leonard man declined to comment on the incident. His companion could not be reached.

The situation prompted Michigan Open Carry Inc. to speak out Monday. The pair’s actions were “reckless, and primarily designed to draw attention and a response,” group officials said in a statement. “MOC advocates for and educates people about the lawful open carry of a holstered handgun for the purposes of everyday self-protection. ...

“There is a clear difference between the everyday protection we advocate for and the attention-seeking actions of these individuals. Wearing a mask, dark glasses, visible body armor and a rifle slung across your chest instills a very specific image that cannot be ignored.”

Indeed, as the two walked into the police station Sunday, there was a beat of silence until officers inside reacted to the men.

The armed man turned his camera to capture two officers standing in a doorway, guns pointed at him. Then the camera fell and went black, but continued recording voices for almost 21/2 minutes.

“What the hell’s the matter with you,” one officer yelled.

The armed man did not immediately comply to repeated orders to drop his weapons, the video’s audio indicates. “Can we all calm down?” he said. “It’s all legal, sir.”

Another officer repeated the demands. “Put it down. Barrel down, set it down, step back,” he said. “You’re carrying a sidearm as well.”

As the standoff continued, the unarmed man can be heard attempting to file a complaint.

“We’re dealing with a police situation,” one officer replied. “You can file your complaint in a minute.”

The men were taken into custody, according to the police statement.

“I find this behavior totally unacceptable and irresponsible,” said Dearborn Police Chief Ronald Haddad in a statement. “This is not a Second Amendment issue for me. We had members of the public in our lobby that fled in fear for their safety as these men entered our building.

“I want to express my appreciation for the many calls of support we’ve received from the community including a call from the president of Michigan Open Carry Inc. who made it clear that he and his organization stand with law enforcement and unequivocally condemn the actions that took place in our lobby this past Sunday.”

Tom Lambert, president of Michigan Open Carry, added Monday: “Like it or not, exercising your rights is not black and white. How you act and portray yourself is a big part of advocacy. I believe these gentlemen failed in this regard.”

At a time when attacks on law enforcement authorities nationwide are climbing, “the last thing we need is someone strapping on an automatic weapon and walking into the police department,” said Gregg Allgeier, a business agent with the Police Officers Association of Michigan and a former Dearborn cop. “We don’t have the time to deal with that. It’s just an unnecessary burden for people to kind of test their political agenda. So we would appreciate they would use better judgment in the future.”