The Federal Bureau of Investigation and Michigan State Police provided few details Monday as they conducted joint raids at the home and office of state Sen. Bert Johnson, a second-term Democrat with a history of recent financial issues.

Authorities spent more than an hour at the Johnson home on McLean off Woodward. Agents came out with boxes and bagged items, putting them inside of a pickup in the driveway and in a car that was parked on the street in front of the house. Camera flashes were seen going off from the second-floor window of the two-story brick home.

FBI spokesman Tim Wiley said agency personnel were “on the scene at a residence in Highland Park conducting a law enforcement activity” on Monday morning but declined further comment.

State police said they would not be releasing any additional information during what Banner called an “ongoing investigation.” 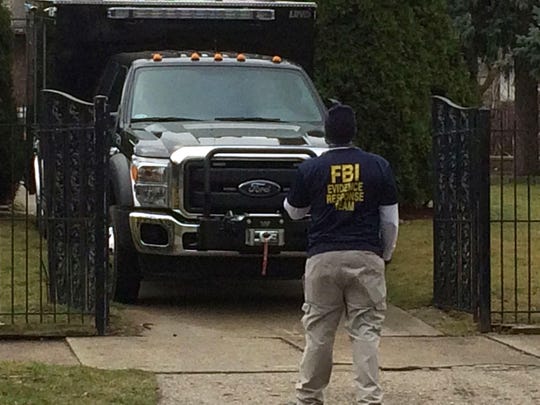 The Highland Park raid was taking place on McLean off of Woodward at the home of the senator, who has served since 2010. (Photo: Charlie Ramirez / The Detroit News)

Johnson, a Democrat who has served in the Legislature since 2010, has had several financial problems since taking office, including unpaid bills and a series of late or incomplete campaign finance reports, according to Michigan Secretary of State records.

In Lansing, state Senate police on Monday morning blocked off the elevator to Johnson’s office in the Connie B. Binsfield Office Building. Johnson represents the 2nd Senate District, which stretches from southwest Detroit through the city’s east side and includes Highland Park, Hamtramck, Harper Woods and the Pointes.

Amber McCann, a spokeswoman for Majority Leader Arlan Meekhof, confirmed the FBI executed a search warrant for Johnson’s office at around 9 a.m., but said the Senate has “no further details regarding this matter.”

Authorities left the building around 11:40 a.m. carrying a small assortment of rolling carts and accordion folders as they got into three vehicles marked with windshield signs indicating they were “on official FBI business.”

“We had investigative activity here in the Senate,” said one law enforcement official, who refused to give his name to reporters and declined to provide any additional details.

Johnson did not immediately respond to a voicemail on Monday, and his office did not return a call. An attorney who previously represented him did not reply to a voice-mail message.

“As has been reported, there is an FBI and MSP investigation of Sen. Bert Johnson,” Senate Minority Leader Jim Ananich, D-Flint, said in a statement “I take this situation very seriously and I will be monitoring it closely.”

Johnson’s former chief of staff and former campaign committee treasurer Eric Pate said he was served Monday with a subpoena but declined to say what information was requested from him. He said he has “no clue” why it was issued.

Pate left his job at Johnson’s office Sept. 1, but would not say why. He said he remains a close friend of Johnson's.

"I'm shocked by it," Pate said about the raids.

Steve Hood, a longtime Detroit political strategist who has worked for Johnson on state House and Senate campaigns, said he was caught by surprise Monday morning.

Hood works out in Highland Park. He heard about the raids, drove by Johnson’s house on his way home and saw the “madness.”

“He’s been clean for a while man,” Hood said of Johnson, who was convicted of armed robbery as a teenager.  “He’s really upstanding. He’s been giving ‘Bert Johnson unchained’ speeches to the community. He’s really become a stellar statesman, so I don’t know what could be up. I have no idea.” 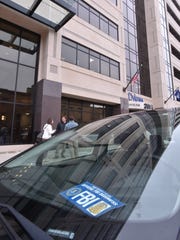 But Johnson has faced legal and financial questions in recent years. A bench warrant was issued for his arrest in Illinois in 2015 as Chicago-based Paladin Political Group sought to collect on a $21,983.37 judgment against Johnson for political fundraising work in 2013, when the Highland Park politician was considering whether to run for Congress or seek re-election to state Senate.

Johnson supposedly settled the matter in court later that year. But Paladin has still not received any payment from Johnson, Managing Partner Dave Seman said Monday.

Seman said he had not been contacted by any law enforcement officials on the matter and does not believe the fundraising debt is in any way related to Monday’s raids.

Because Illinois applies statutory interest on monetary judgments, Seman said Johnson probably owes his firm closer to $25,000 at this point. He mentioned the debt to Johnson earlier this year in Lansing.

“We tried to put him under collections, but we were told to get in line,” Seman said.

Other financial issues have surfaced. In 2015, Johnson paid off a court-ordered $7,446 campaign office rental bill after a nearly five-year legal battle with the landlord, who evicted Johnson from his Hamtramck office space in 2010 for not making rent payments. Though the property management company won the judgment against Johnson’s campaign, it was unable to collect in 2011 because Johnson owed child support in Wayne and Oakland counties.

Secretary of State's Office records indicate that Johnson has not filed three campaign finance reports for 2016 and has not filed the first 2017 report. As a result, he owes $4,000 in late fees to the state.

"The rest will be referred at the appropriate time if it remains unpaid,” said Fred Woodhams, a spokesman for Secretary of State Ruth Johnson.

The senator did file required 2015 campaign finance disclosures to the state in 2016, records show.

Michigan Campaign Finance Network Director Craig Mauger said he doesn't know if the late reports are related to the investigation, but he said the issue could be "emblematic" of Johnson's "disregard" for the state's financial disclosure law.

Johnson, who is term-limited at the end of 2018, has had higher political aspirations. In 2012, he ran unsuccessfully for the 13th Congressional District seat in a five-person Democratic primary in which Detroit incumbent U.S. Rep. John Conyers Jr. prevailed.

In 2014, Johnson became Conyers’ campaign manager and was re-elected himself to a second four-year term in the state Senate. The senator stepped in to help run the longtime congressman’s campaign after hundreds of petition signatures were ruled invalid under state law — a finding that was later overturned by a Detroit federal judge who ruled the law was likely to be ruled unconstitutional.