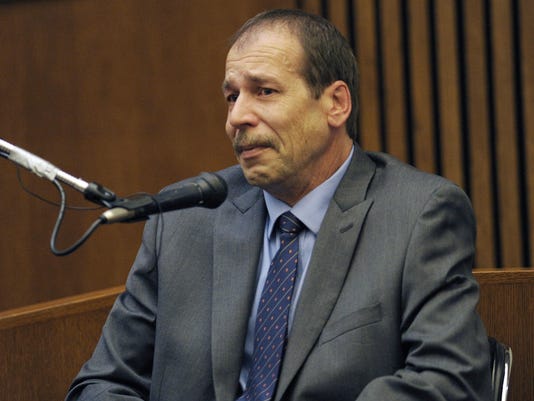 Lansing – Jurors who convicted a Dearborn Heights man of murder for shooting an unarmed black woman on his porch in 2013 should have been given explicit instructions about Michigan’s “stand your ground” law, his attorney argued Thursday before the state Supreme Court.

Theodore Wafer, a 58-year-old former airport maintenance worker at Detroit Metro Airport, is seeking a new trial in the shooting death of 19-year-old Renisha McBride. A jury found him guilty of murder, manslaughter and felony firearm possession in 2014.

A Michigan law approved by legislators in 2006 provides homeowners with a “rebuttable presumption” of self-defense if they use deadly force to stop someone in the process of breaking and entering, provided the homeowner feels a threat of imminent death or bodily harm.

While jurors rejected Wafer’s self-defense claims, they should have been told to consider that “presumption” before they decided his fate, said Jacqueline McCann, an attorney with the State Appellate Defender Office who took Wafer’s case to Michigan’s highest court.

She called the law a “thumb on the scale that the Legislature intended” as an extra protection for homeowners responding to threatening situations.

Wayne County Prosecutor Kym Worthy’s office maintains there is no evidence McBride was threatening Wafer or attempting to harm him when she banged his doors in the early morning hours of Nov. 2, 2013.

She was disoriented and seeking help after a single-car accident less than a mile away from Wafer’s home on West Outer Drive and Dolphin near Warren Avenue, according to prosecutors and her family.

“This could have been a neighbor telling him there was somebody pounding at your door and I chased them off,” said Timothy Baughman, a special assistant attorney in Worthy’s office. “He said he didn’t know her gender. He didn’t know the race. He opened the door, and he shot.”

At trial, Wafer testified he had grown increasingly worried about “violent” banging on his doors in the middle of the night, including the sound of metal hitting a door. His attorneys also noted a dislodged screen door, arguing McBride had kicked it in.

As he opened his door, a “person came out from the side of my house so fast,” Wafer testified. He shot McBride in the face, calling it a “total, total reflex reaction.”

McCann argued additional instructions could have led jurors to find he had a right to “presume” McBride was a threat even though he did not see her before firing.

Justices Joan Larsen and Bridget McCormack both questioned attorneys on whether instructing jurors about the presumption law could have made it almost impossible for prosecutors to secure a conviction.

The instructions, as written, leave out the “rebuttable” side of the law, McCormack said, suggesting “it’s basically directing a verdict.”

Baughman made a similar argument.

“It doesn’t just put a thumb on the scale, it puts a whole hand,” he said.

The 2006 stand-your-ground law can be used to trigger a self-defense argument, which heightened the burden of proof for prosecutors in the Wafer case, Baughman said. But he argued it should never be presented to jurors as an instruction.

Chief Justice Stephen Markman pressed Baughman on what legislators intended when they passed the law in 2006, and whether someone like Wafer was “entitled to be full of piss and vinegar in reacting to the circumstances he confronted at 4 in the morning.”

Markman also asked the defense if a greater impact may have occurred when the trial court “quite wrongly” gave jurors inconsistent instructions about whether Wafer had a duty to retreat from the potential confrontation, which he did not.

Baughman told Markman he believed jurors understood Wafer had no duty to retreat in his own home or porch. But he said evidence presented by prosecutors showed Wafer was not facing a reasonable threat of death or great bodily harm.

Justice Richard Bernstein repeatedly asked both the prosecuting and defense attorneys at what moment the presumption of self-defense kicks in under the law.

Markman made a distinction between a daytime delivery and door knocking at 4 a.m., noting Wafer lived in a “high crime area” and referencing allegations McBride kicked his screen, broke a peephole and “rushed at” Wafer when he opened his door.

“That’s not exactly the same as the federal express carrier.”

The circuit court “did not abuse its discretion when it determined that the evidence did not support the assertion that McBride was actually in the process of breaking and entering when the shooting occurred,” the panel held.

Wafer’s attorneys quickly appealed to the Michigan Supreme Court, which in January agreed to oral arguments.

Justices are not required to decide the case until next summer but have the option to do so sooner, court spokesman John Nevin said Thursday. Possible outcomes include denying Wafer’s appeal, issuing a written opinion or an order sending the case back to a lower court with instructions.