Tears. Hugs. And lots of prayers.

A 68-year legacy of educating young women in the Felician-Franciscan tradition came to an end Saturday as Ladywood High School held its final mass before closing its doors.

Students, families, alumnae, faculty and staff took the opportunity to walk through the all-girls Catholic school one last time. They were grateful for the chance.

“For 68 years Ladywood has remained a pillar in our community,” said Sister Mary Alfonsa Van Overberghe, chair of the school's board of trustees. “Our gathering today allows us to give thanks to God for 68 years.”

Ladywood, opened in 1950 on Newburgh Road in Livonia, is closing its doors after declining enrollment. The Felecian Sisters announced the decision back in December 2017.

Head of School and President Tracey Mocon said she wanted an opportunity for everyone in the community to “celebrate the legacy of Ladywood and all of the women that graduated from here.”

“My hope for my students is that they will continue to keep their faith,” she said. “That was always our priority here at our school. Faith.”

Rose Ann McHugh, (left) from the class of ’68, and Jeanne Fuller, class of ’73, browse through their old yearbooks during a tour of the library at Ladywood High School. Clarence Tabb Jr. / The Detroit News
Fullscreen

Teressa Placucci, 40, from the class of ’96, takes a photo of the photo collage representing memories and moments of the school. Clarence Tabb Jr. / The Detroit News
Fullscreen

Katy Harley Fredrick, 53 and from the class of ’83, points to a photo of herself in class when she was 17 years old during her junior year in the 1982. Clarence Tabb Jr. / The Detroit News
Fullscreen

Katy Harley Fredrick, 53, (center) and two classmates are seen in a photo from her junior year at Ladywood, when she was 17. Clarence Tabb Jr. / The Detroit News
Fullscreen

Mary Ellen, 81, a student from the second-ever graduating class at Ladywood (1954) walks the hallway during the tour. The school opened in 1950. Clarence Tabb Jr. / The Detroit News
Fullscreen

Freshman Christina Wollenhaupt says she is still feeling devastated by the closure.

“When I first found out that Ladywood was closing it hit me really hard,” she said. “Even though I’m a freshman and this is my first year, the school really meant a lot to me. I’ve learned a lot more about my faith that I probably wouldn’t have learned anywhere else.”

The Felician Sisters of North America offered each student a $500 tuition grant for each year they transfer to and remain at another area Catholic high school. The school said it is pleased that 95 girls have committed to attend one of nine area Catholic schools in the fall. 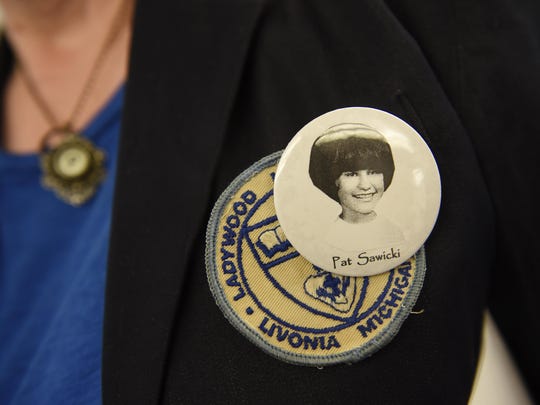 As for the future of the Ladywood site?

Felician Services, Inc. has accepted proposals from individuals, organizations, agencies and non-profits corporations who are interested in acquiring all or part of the property. Proposals were due June 1, and a decision is expected by July 1.

Dean of Students Laurie Falzon said she felt mixed emotions about the last fellowship. She’s spent the last several months writing recommendation letters for some students and sharing her contact information so she can support them after they move on.

“I’m feeling sad and excited at the same time,” she said. “This is our last time to say hello and goodbye. These are wonderful girls and they have a lot to offer to the world.”

Mocon said she wished all the students luck, but she knows they won’t need it.

“I know they will be alright,” she said. “They have everything they need to succeed in their future from Ladywood.”