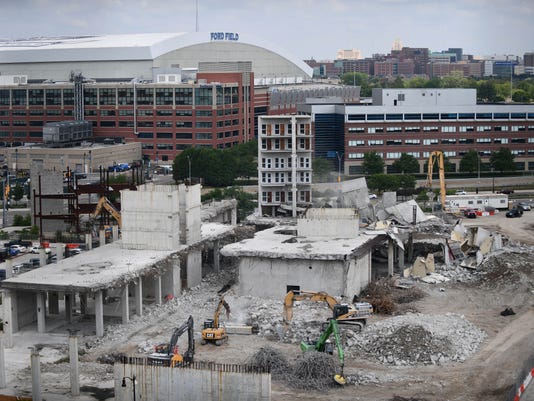 Demolition of the unfinished jail site along Gratiot Avenue is underway in Detroit.(Photo: Daniel Mears, The Detroit News)Buy Photo

Detroit — A federal judge has denied an attempt by three Wayne County residents to stop the county from issuing bonds for a new jail complex in Detroit.

Judge Bernard A. Friedman ruled Wednesday that the plaintiffs' request for a temporary restraining order and preliminary injunction did not meet the court's standards.

Friedman said he based his rejection on the fact that Wayne County is more likely to prevail in the lawsuit filed by the county residents, and the county would also suffer irreparable injury in delaying the bond issuance from the temporary restraining order.

Their federal lawsuit alleged that Wayne County's notice published in The Detroit News and Detroit Free Press on April 17 did not accurately describe the project and that it was published in a manner that minimized its reach to Wayne County voters. The complaint said this deprived them of their ability to collect signatures for a referendum that would have allowed citizens to vote on the bond issuance.

In their motion for a temporary restraining order, the plaintiffs sought to halt the county's plans to issue the bonds for jail construction this summer, saying it has "not met the statutory notice requirements" to do so. County officials say they plan to use about $300 million in new bonds toward the project.

Eric C. Williams, attorney for the plaintiffs, said in court Wednesday that the public notice to issue bonds was vague and provided no context for citizens who don't follow the news media.

He added that "hundreds of people who were looking out for the notice couldn't find it."

Gary August, outside counsel to Wayne County, said in court that the county believes its notice of intent to issue bonds was "reasonable."

County spokesman Jim Martinez issued a statement Wednesday afternoon saying,"We are pleased with today's decision and will continue to pursue dismissal of the lawsuit."

In June, the Wayne County Commission approved a $533 million proposal from Dan Gilbert's Rock Ventures to build a criminal justice complex that would allow the county to shutter its aging jail and court facilities.

As part of the deal, the county sold the unfinished jail site on Gratiot to Rock Ventures. The structure is currently being demolished and Rock Ventures plans to replace it with mixed-use development.

For nearly five years, the failed jail sat unfinished, costing taxpayers $1.3 million a month to repay its bond debt as well as cover security and maintenance.