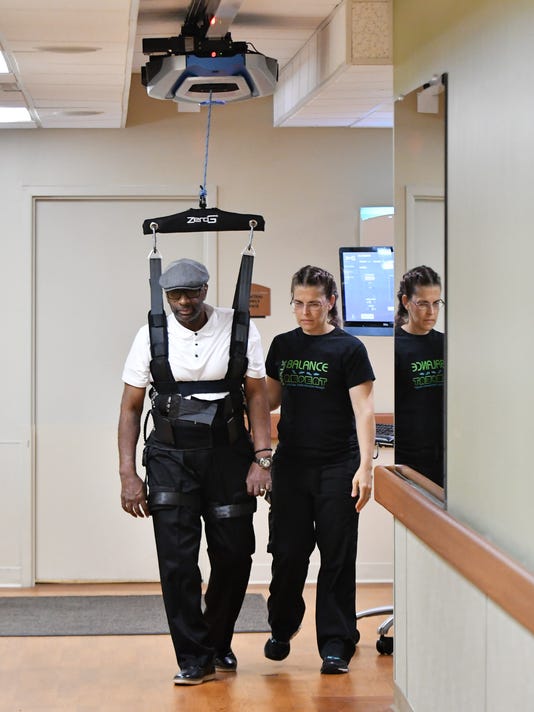 Physical therapist Jennifer Ratermann, right, assists Sloan Hogan of Detroit, 68, as he walks during his therapy session using the ZeroG Gait and Balance Training System at Special Tree: NeuroCare Center in Romulus, Mich. on July 18, 2018. The ZeroG Gait and Balance Training System by Aretech is a robotic body-weight support system that allows patients to relearn walking and regain their sense of balance. (Robin Buckson / The Detroit News)(Photo: Robin Buckson, The Detroit News)Buy Photo

Romulus — A year after his near-death car accident, Sloan Hogan grinned and winked at his wife after walking around cones and kicking bean bags off the tops of them, one of many small victories during a recent rehabilitation session.

"It’s impossible for you to know where I’ve come from," said Hogan. "I was paralyzed… I couldn't feel anything from my armpits to the bottom of my feet. I couldn't feed myself. I had no idea what lied ahead."

During the recent day in rehab, Hogan, 68, walked, maneuvered and completed tasks with his physical therapist — and the help of a robot.

After an accident in last year in May, Hogan was paralyzed from the upper chest down and dealt with crippling depression.

Hogan was on his way to meet a work colleague when someone backed out of their driveway quickly as he was driving by. Hogan hit the rear of the vehicle and lost feeling in his body. His vehicle continued and hit a parked car across the street.

Physical therapist assistant Bryan Goetz, left, helps physical therapist Jennifer Ratermann as she tightens the ZeroG harness on Sloan Hogan, 68, of Detroit to use the ZeroG Gait and Balance Training System at Special Tree: Neuro Care Center in Romulus, on July 18, 2018. The ZeroG Gait and Balance Training System by Aretech is a robotic, body-weight support system that allows patients to relearn walking and regain their sense of balance. Robin Buckson, The Detroit News
Fullscreen

Physical therapist Jennifer Ratermann assists while Sloan Hogan, 68, of Detroit knocks a bean bag to the floor without toppling the cone it's sitting on during his therapy session. Robin Buckson, The Detroit News
Fullscreen

Physical therapist Jennifer Ratermann, right, and Sloan Hogan, 68, of Detroit react after he knocks bean bags to the floor without toppling the cones they were placed on. Robin Buckson, The Detroit News
Fullscreen

Physical therapist Jennifer Ratermann and Sloan Hogan, 68, of Detroit react after he finishes a turn of a game that helps with movement and balance. Robin Buckson, The Detroit News
Fullscreen

Physical therapist Jennifer Ratermann detaches the bar that hooks to the harness on Sloan Hogan, 68, of Detroit at the end of his therapy session. Robin Buckson, The Detroit News
Fullscreen

“He said he couldn't feel from his armpits down and couldn't press on the breaks, but I didn’t see movements in his arms either,” his wife, Nedra Hogan, said. “He has come a long way.”

Now, with his outlook improving with each therapy session, Hogan said he wants to walk in to his 50th class reunion next month with his wife on his arm and someday wrestle with his grandchildren again.

“I think it’s the grandkids, really, that I look forward to someday wrestling with again,” said Hogan of Detroit. “I could never outrun them, but just to get out there and be able to challenge them and play basketball with them.”

Hogan is one of 15 people using the ZeroG Gait balancing system, a robotic body-weight support machine that experts say can help patients with poor coordination relearn walking after a brain or spinal injury.

Special Tree, a brain rehabilitation center in Romulus where Hogan has therapy, is the first to offer the machine in southeast Michigan. Patients are tethered to a holster with straps affixed to a machine attached to the ceiling, allowing users to move without the fear of falling. Patients have to be able to stand, therapists say, to use the ZeroG machine.

The device, at $250,000, is too much for at-home therapy, but valuable for a rehab team that needs to make sure patients don't fall during sessions.

"... We've seen results with patients who are getting further in their recovery faster and have benefited psychologically," said Megen Allen, Special Tree director. "They are harnessed in by the machine and get the sensation of walking upright without hands on them. They feel like they can really do it."

With every successful task during the recent rehab session, Hogan shuffled his feet, doing a little jig to cap his accomplishment.

His wife stays with her husband during his sessions to boost his spirits and watch as he moves from depression to determination in pushing his body towardrecovery.

“He's more upbeat and he’s trying to walk more with his walker even though it’s challenging for him," Nedra Hogan said. “He’s used this machine about three times and he has more confidence and is excited to use it.”

Hogan works on his balance with his physical therapist, Jennifer Ratermann, by doing games, receiving biofeedback, and performing challenges. He learns how to use reflexes by catching himself instead of relying on someone to hold him. Hogan said he feels more independent and in control when he gets to ditch his walker, which he uses outside of therapy, for the machine.

"Sloan is a higher-level client we are working with to get those reflexes and muscle back, and I don't think we could have him kick bean bags off of a cone without this machine," said Ratermann. "Before, we used gait walking with a belt that was very uncomfortable for men and required workers to hold on, and we couldn't give the patient any leeway, but this machine can and it's a little more worry-free."

Dr. Gianna Rodriguez, associate professor of physical medicine of rehabilitation at the University of Michigan, called devices like ZeroG cutting-edge.

"Training with weight-assisted ambulatory devices can increase strength and endurance for those who have weakness in their arms and legs," Rodriguez said.  "These devices are now part of most of the big therapy facilities for this reason."

Hogan said while he was nervous at first, he quickly noticed how his physical capabilities were improving.

"When it happened, I fell into a deep depression ... then well ... I hit occupational therapy," he said. "A patient-care assistant was feeding me because I couldn’t lift my arms. She just looked at me and said: 'You can feed yourself' and pushed me to keep trying.

"I look forward to driving maybe again. Being able to travel without assistance and walking up a flight of steps."

For Hogan, rehab has been a re-learning experience, and he keeps his focus on his goals — that reunion and the grandkids.

"You don’t miss it until you lose it and you work to get back to the way things were," he said.