The Wayne County Sheriff's Office says the driver in the fatal hit-and-run of an off-duty sergeant with the office has been caught. 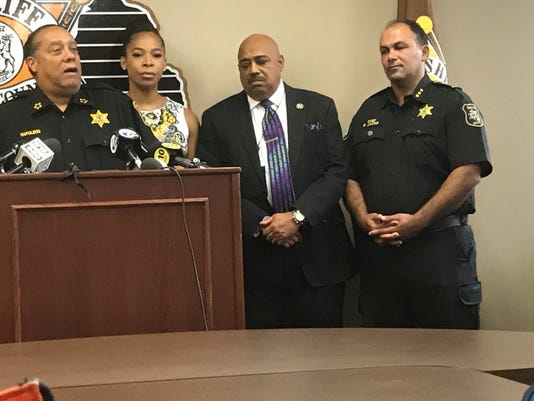 The Wayne County Sheriff's Office says a suspect in the fatal hit-and-run of an off-duty sergeant has been caught.

Westland police arrested a 47-year-old Detroit man suspected in the death of Lee Smith on Tuesday and recovered the vehicle allegedly used in the crash, officials said Thursday morning at a news conference at the Wayne County Sheriff’s Office headquarters on Woodward.

An hour later, police recovered the black 2012 Buick Enclave allegedly driven during the crash in Inkster on Inkster Road and Michigan Avenue.

Smith was jogging westbound in the road on Hines Drive, between Inkster Road and Middle Belt, when he was hit by an eastbound vehicle that crossed the center line. The driver never stopped; police launched a local manhunt.

Sheriff Benny Napoleon said “30 to 40 people” from the Sheriff’s Office and Westland police ran down tips and scoured “hours and hours” of surveillance video, from dozens of locations before an arrest was made.

“We tracked the vehicle from spot to spot to spot,” Napoleon said. “Yesterday, I said the net was closing in. Today, it closed.”

But it was a tip that led to Thursday’s arrest, which came hours after the reward for information jumped to $15,000. It had started out at $2,500.

Napoleon said a “tremendous amount of help” from the business community in boosting the reward and from the general public in providing tips and leads, along with the “collective resources” of law enforcement, led to the arrest.

“Without question, Westland Police Department has done an extraordinary, extraordinary job in this investigation,” Napoleon said.

Westland police expect to seek charges against the suspect on Friday, Jedrusik said.

Napoleon declined to speculate whether Smith was targeted or the crash was the result of distracted or impaired driving.

Napoleon the tipster deserved the $15,000 reward. Crime Stoppers of Michigan will make that decision.

Jedrusik said he hadn’t personally seen the recovered vehicle yet, but he understood it was damaged. An image of the suspected vehicle showed damage to the vehicle’s hood.

Smith’s widow was notified of the arrest at 7 a.m. Smith’s funeral was expected to take place next Thursday, Napoleon said, but that’s “tentative.”

An area funeral home had volunteered to cover the service, Napoleon said.

Authorities are scheduled to provide more details at a press conference Thursday at its Woodward Ave. headquarters, an official confirmed.

At 10:30 a.m. Tuesday, Sgt. Lee Smith was jogging on the side of Hines Drive, between Inkster Road and Middle Belt in Westland, when he was fatally struck by what police described as a small black SUV.

Smith, 55, was a 25-year veteran of the sheriff's office and had just given notice that he would be retiring on Oct. 1. He worked road patrol and with the mounted unit.