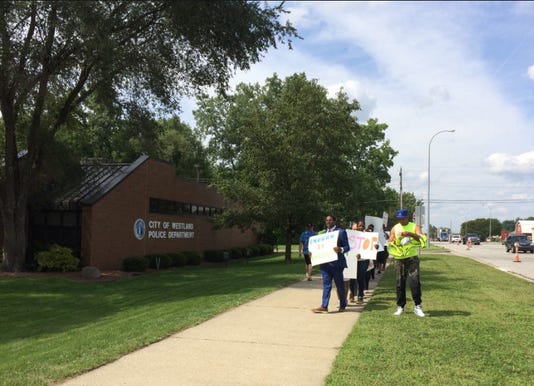 A small group protest the use of a stun gun on a man in front of the Westland Police Department.(Photo: Charles E. Ramirez / The Detroit News)Buy Photo

Westland — A Detroit civil rights group Friday called for Metro Detroiters to boycott businesses in Westland to get the city to fire a police officer who used a stun gun on a man holding an infant last week.

"We are putting a full-blown travel advisory for the city of Westland," said the Rev. Charles Williams II, president of the National Action Network's Michigan chapter. "We will not eat at your restaurants. We will not shop at your shopping malls. We will not support your stores because if you can't respect us, we will not travel, we will not give money where we are not respected. We will not be coming to Westland anymore."

Williams made the call during a small demonstration held noon Friday in front of the Westland Police Department's headquarters on Ford Road near Newburgh Road. The senior pastor of the Historic King Solomon Missionary Baptist Church in Detroit, Williams announced plans for the protest on Wednesday.

That same day, Westland Police Chief Jeff Jedrusik announced the officer involved in the incident was suspended without pay for 30 days.

About five or six dozen people gathered in front of the Westland Police Department for the protest. There were about three people who showed up to protest against the group and show their support for police officers.

The group marched up and down along the sidewalk between the police department's building and Ford Road. They chanted "No justice, no peace!" and "Hey, ho, dirty cops have to go!" Many carried signs that said "Justice 4 Ray," "Enough is enough" and "He only got suspended for 30 days!"

The demonstration lasted about an hour and finished with a prayer.

The man on whom the police officer used the taser, Ray Brown, also attended the protest along with members of his family and friends. He said he was grateful for outpouring of support he has received.

"I appreciate all the support from the community surrounding me," he said. "I would just like to say to everyone that's out here, my level of gratitude to everybody that's out here and put their own safety at risk to stand up to the injustice we deal with every single day, I appreciate it."

Police said the incident happened Friday night when officers arrived at a backyard barbecue and reported a man was intoxicated and uncooperative.

Officials said when the man learned he would be arrested, he grabbed a 2-month-old baby and wouldn't release him. Officers told the man several times to return the baby to his mother, but the man refused to do so.

Police said they were worried for the infant's safety and because they had limited options in removing the infant from the man's grasp, they used a Taser to incapacitate the man and wrest the child away from him.

The incident was video recorded with a cellphone and shared on social media.

Police said Brown has been charged with disturbing the peace, hindering a police investigation, damage to property, neglect of a minor child, disorderly person, resisting arrest and assault and battery on a police officer.

They also said he had multiple outstanding warrants for his arrest.

"I have always had the utmost respect for the National Action Network and the incredible work that they do," Westland Mayor Bill Wild said in a statement. "I am always available for an open dialogue with them on this issue, and any other concerns they may have with our community.”

Brown's mother said she came to the demonstration to show her support for her son and her grandson.

Williams said Friday's protest isn't the end of the group's campaign for Brown.

"This is just the beginning of a long fight," Williams said. "We are going to fight this to the very end."