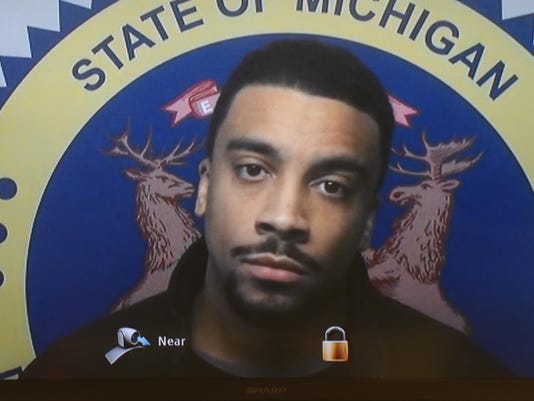 Former Detroit Police officer Richard Billingslea was sentenced Friday to two years probation and ordered not to have firearms or other weapons for using excessive force against two Detroit men.

Richard Billingslea, 26, did not comment after he was sentenced in Wayne County Circuit Court by Judge Donald Knapp, who also ordered Billingslea to undergo anger management as part of his sentencing and to find another job.

Billingslea is accused of using excessive force against D'Marco Craft, a 27-year-old college student and Michaele  Jackson, a Detroit city bus driver, at an east-side gas station on May 31, 2017.

Jackson, 39, told the judge he hopes the charges and the conviction against Billingslea "stops this from ever happening again to somebody else."

Craft said: "I'm just upset that I'm here today because someone who was put in a position to protect me is out to hurt people. The scary thing about it is about is his partner is still out and there's people covering up for him. That's the scariest thing about it."

Craft, a criminal justice student, said he was taken to jail "and beaten up." He was booked on a felony charge of resisting arrest. A warrant request was denied by the Wayne County Prosecutor's Office.

Billingslea's attorney, Pamella R. Szydlak, said, "We have a lot to say but we're not going to say anything further."

Jackson has provided video footage of the incident, which is the subject of a federal lawsuit filed against the city of Detroit, Billingslea and Detroit Police officer Hakeem Patterson. According to the lawsuit, Craft and Jackson went to the gas station on Harper to buy cigarettes and encountered the officers.

When Craft saw Billingslea inside the gas station, he left and Billingslea allegedly shouted to him: "You ain't buying nothing today? 'Cause I'm here," and Craft said to the officers, "'Cause I know how you are ..."

Billingslea and the other officer allegedly followed Craft to his car and harassed him and Jackson, "trying to pick a fight," according to the lawsuit.

Jackson went toward the gas station to buy cigarettes. As he walked past Billingslea,  the officers grabbed him and threw Jackson face-first to the concrete and the other officer joined the struggle, according to Craft and Jackson.

Jackson said he tried to walk away from the incident but that when he returned to the gas station to buy cigarettes, he was followed by Billingslea, who sprayed Jackson in the face with Mace and slammed the bus driver into a metal rack of Hostess bakery treats.

Craft was recording the incident and at one point, Billingslea allegedly pointed a can of Mace at him in a threatening manner.

Craft said police demanded his phone and his password under the threat of arrest. He said it appeared some things were deleted from his phone and that police slammed the phone on the counter of the gas station, smashing the phone's glass screen before throwing the mobile device into a garbage can.

Billingslea later filed an incident report saying he was trying to place Jackson under arrest but Jackson and Craft said they were never told that.

In a news conference, Detroit Police Chief James Craig said Jackson "did take a swing at the officer" before being grabbed, but the attorney for the men disputed those allegations.

Craft said the officers had harassed him "many times" in the past for no "legal reason."

Last month, Billingslea pleaded no contest to aggravated assault as part of a plea deal. Other charges were dismissed: assault with intent to do great bodily harm less than murder, assault and battery, and common law offenses.

"The defendant acted like a bully who hid behind his badge and his gun," she said, adding later: "This is outrageous behavior by this person who was entrusted with a very important function in our society."