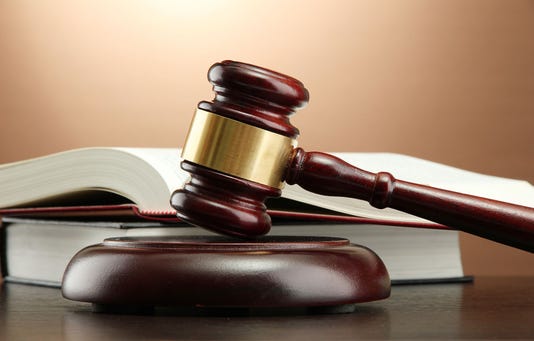 Judge Christopher Blount of 36th District Court issued a habeas corpus writ for Donyele Davis for three cases involving a tenant-landlord complaint. Davis was scheduled to be arraigned on several complaints about fixing emergency violations on a property she allegedly co-owns on the city's west side.(Photo: .)

A Detroit judge ordered a city landlord arrested Monday for failing to show up to court to answer questions about tenant complaints about her property.

Judge Christopher Blount of 36th District Court issued a habeas corpus writ for Donyele Davis for three cases involving a tenant-landlord complaint. Davis was scheduled to be arraigned on several complaints about fixing emergency violations on a property she allegedly co-owns on the city's west side.

"Why is your client not here today?" Blount asked Davis' attorney, Maroun Hakim. The defense attorney told the judge he told his client he would be in court on her behalf.

In one of the complaints about Davis' property in the 800 block of West Euclid, she is accused of not making emergency repairs.

Tenant Laura Casati said there's no electricity on the second floor of the historic townhouse she is renting from Davis.

Faulty electrical wiring on the second floor, an improperly-installed water heater and an electrical box on the outside of the house that's exposed to rain are some of the problems cited by Casati and her attorney, Marlayna Schoen.

Casati said she's hopeful the problems will be fixed for "not only myself but for the other clients."

Casati, who has a hearing scheduled for 9:30 a.m. Tuesday in 36th District Court on an order of eviction, said she has put her rent into escrow while the issue over the repairs are worked out.

The City of Detroit buildings, safety and environmental department ordered Davis to make repairs in Casati's rental unit to the electrical panel and wiring and the water heater, and install smoke detectors in and near bedrooms

Hakim pleaded with the judge to allow his client to come to court Tuesday, but the judge said Davis was supposed to appear Monday and did not. Blount set bond at $200 for each of the three cases filed against Davis.

Elizabeth Mullins, assistant corporation counsel for the City of Detroit, had asked for a $10,000 bond for Davis. "This is a serious situation and the fact that (Davis) is not here communicates to the court, communicates to the people she's not  taking this matter seriously," Mullins said.

"My client realizes this is a serious matter," Hakim said.

She added the "hot water heater was improperly installed and there's an associated carbon monoxide leak."

The city on June 11 gave Davis four months to fix the problems, but she and her husband failed to comply with the order as well as subsequent emergency orders from another 36th District Court judge, Schoen said.

"This is an absolute crisis. They have shown a wanton disregard for my client's safety and the property they manage," she said.

Hakim said he has made an appointment with the city of Detroit inspector for Tuesday so his client can have a game plan" to fix the problems. He said his client does not "operate" the building and is only the resident agent.