After twelve years of construction on their dream home, an Ohio steel magnate and his wife decide to put their unfinished marvel on the market.

Grosse Ile — After more than a decade of building, a long-awaited mansion in Grosse Ile is for sale at $29 million, still unfinished.

The custom-built home, located at 20638 East River Road, features 16,855-square feet, eight bedrooms, 19 bathrooms (eight full), a pool inside a conservatory, a theater and an aquarium.

It was listed on Zillow in early September by Signature Sotheby's International Realty of Birmingham for $29 million. 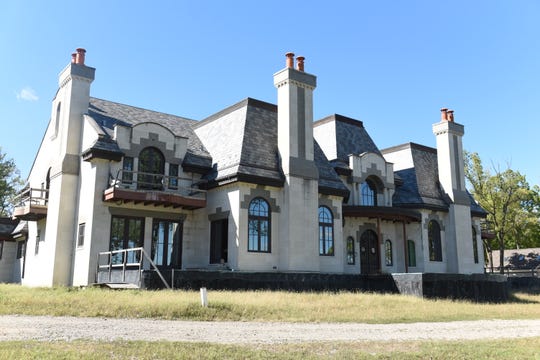 John C. Bates, chief executive officer of Heidt­man Steel, a Toledo company that has supplied steel for the three Detroit automakers, and his wife began planning their dream home in 2002. At the time, the house was being built for the blended family of eight children and a few grandchildren.

The couple from Ohio traveled across the world meeting with architects and collecting ideas for designs which would be incorporated into their home dubbed Safehaven, said realtor Sue Lozano.

In October 2006, they broke ground and started erecting the foundation with steel beams, rebar and concrete. Then, the 2007-2009, the recession hit, plummeting the housing market. As time passed, their children were getting married, having more grandchildren and now the couple feels the house is too large for them.

"Therefore, Mr. and Mrs. Bates have decided that at this time in their retirement age, and the kids having their own growing families and homes, Safehaven would be a little more than they would want to handle," Lozano said. "This has been a huge decision to say goodbye to their dream home."

The home isn’t finished and won’t be. The structure is completely done and new owners will add finishing touches to their liking, Lozano said. Builders think it’ll take two more years to complete.

The Bates' declined to be interviewed.

Additional photos of the home can be found on the Zillow listing.

A double spiral staircase with hand-built railing topped off with brass from the second floor to the lower level.

The main foyer features a huge dome and a music room behind. There's a library with handcrafted wood, a mezzanine and a spiral staircase with a handmade stained glass dome that raises and lowers for cleaning.

The house's main features include a Tanglewood Conservatory including a conference room with kitchenette and closets, a $2 million 6,500-gallon aquarium, 21-seat theater room in the lower level, poker room, game room, bartop space with family gathering area, wine cellar and a crystal hall to accommodate a curio cabinet for keepsakes.

Of course, the home has a stunning view of the Detroit River with a boat dock with double slips for large yachts and a lift for small boats and water toys.

Its smaller features include nine fireplaces, a separate apartment on the lower level, guest suite with a walkout patio, large dining room, a butler's pantry and three laundry rooms.

The main floor, halls, stairs and foyers are all marble and hardwood floors make up most of the bedrooms. The couple also focused on including technology to make the house more modern, including bathrooms with heated towel racks, and all floors have outside decks with heated tubing.

The home has elevators from the lower level to the third level and another elevator from the first floor to the rooftop, where they have built a rooftop observatory to enjoy the night sky or view of the river.