The owner of a consulting firm pleaded guilty Tuesday to covering up a contractor's $1.5 million fraud against the Wayne County Airport Authority 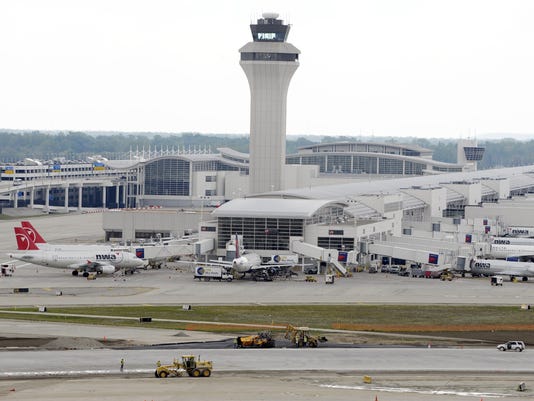 Detroit — A businessman pleaded guilty Tuesday to concealing a scheme that cheated Detroit Metropolitan Airport out of more than $1.5 million.

The scheme involved de-icing salt, an airport contractor and Paul Hurley, 52, of Washington Township, who struck the plea deal two weeks after being charged in federal court.

Hurley admitted hiding the scheme and failing to notify federal investigators, who are probing a widespread fraud that has led to charges involving five people.

In 2012, Tenaglia conceived and executed a scheme to defraud the Wayne County Airport Authority by charging for $1.5 million worth of de-icing salt that was never applied, prosecutors said.

Hurley pleaded guilty to misprision of a felony and faces up to three years in federal prison and a $250,000 fine when sentenced March 28.

"Our citizens deserve protection from the fraud, waste, and abuse that stems from contractors who are motivated by greed rather than a desire to improve our public infrastructure," U.S. Attorney Matthew Schneider said in a statement Tuesday.

Hurley is the third person charged to plead guilty in connection with the scheme.

Tenaglia, 64, of Rochester, pleaded guilty to wire fraud conspiracy in July and could be sentenced in March to almost three years in federal prison.

Contractor William Pritula, 69, of Romulus, meanwhile, pleaded guilty to a bribery charge in July and faces up to 10 years in prison.

Starting in May 2010, Pritula conspired with former airport utilities and infrastructure manager James Warner, 51, of Commerce Township and others to steal money from federally funded programs and commit bribery, prosecutors said.

Warner provided confidential and proprietary information that helped Pritula win airport contracts, according to an indictment.

In exchange for offering bribes, Pritula received contracts worth more than $18 million during a four-year period, according to the indictment.

Warner created phony invoices on behalf of the contractor’s company that “grossly inflated the cost and scope” of Pritula’s work, the government alleged.

In all, Warner pocketed more than $5 million in bribes and tried to cover up the crime by eating evidence, according to the government.

The money Warner received amounts to one of the largest bribery cases prosecuted by the local U.S. Attorney's Office, which has sent ex-Detroit Mayor Kwame Kilpatrick and dozens of others to prison for corruption in recent years.

Warner was charged in May with conspiracy, theft, bribery, money laundering and obstruction of justice during a seven-year stretch of corruption that spanned work at the airport and as a water and sewer official for West Bloomfield Township.

If convicted, Warner could spend more than 20 years in federal prison. He is scheduled to stand trial in February.