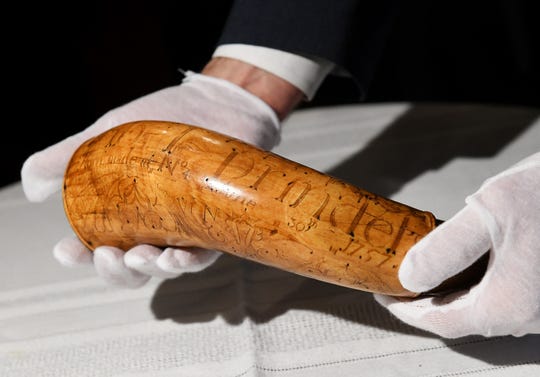 Part of the verse, name and date carved into the powder horn can be seen. The artifact was stolen from the Dearborn Historical Museum in 1952 and was tracked down by Dearborn police and the FBI Art Crime Team. (Photo: Robin Buckson, The Detroit News)

The powder horn, made in 1757, was stolen from the Dearborn Historical Museum in 1952, shortly before an exhibition was set to open to the public. It was on loan from the Detroit Historical Society and was returned to the museum Tuesday during a news conference at the Dearborn museum. 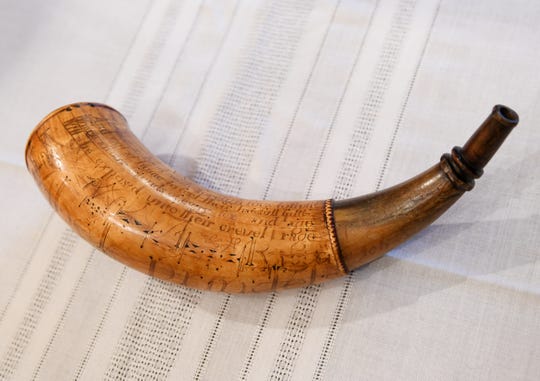 A powder horn carved for soldier Lt. Abel Prindel on June 30, 1757 has been returned to the Dearborn Historical Museum. (Photo: Robin Buckson, The Detroit News)

The horn was found in Philadephia at an estate auction after being tracked by FBI, Dearborn police and museum historians for decades.

"You can tell just how much weapons have changed from 200 years ago to today," said Dearborn police Chief Ron Haddad. "(Curator) Jack Tate came into my office with this case and I looked it up, and the last time it was investigated was 1979 and nothing really happened. I thought: it's not a cold case ... it's a frigid case." 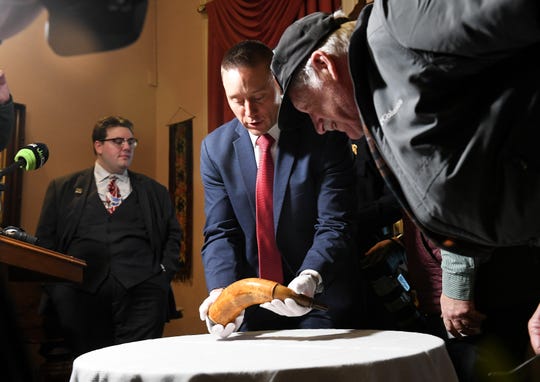 FBI special agent Jake Archer of the FBI Art Crime team holds the powder horn after the press conference while John Bendzick of Dearborn, right, looks on. The 1757 powder horn was stolen from the Dearborn Historical Museum in Dearborn, Mich. in 1952 and returned to it on Jan. 15, 2019. It was tracked down by Dearborn police and the FBI Art Crime Team. (Photo: Robin Buckson, The Detroit News)

The powder horn was made at Fort #4 in Charlestown, New Hampshire, for Lt. Abel Prindel. It belonged to John Nowlin, one of the earliest settlers of Dearbornville (eventually renamed Dearborn). In 1833, the Nowlin family left New York and traveled to Detroit by steamboat. After landing in Detroit, they traveled by wagon to Dearbornville. It's unclear how the family came to possess the powder horn, said Andrew Kercher, assistant chief curator of the Dearborn Historical Museum.

"This was used by William Nowlin to hold gun powder in while hunting," Kercher said. "It's very old and dates back since before the birth of this country ... He wrote about it in his book called 'The Bark Covered House' what these artifacts mean to him and to have them passed down in his family ... that's how it was able to be identified."

The horn is engraved with Prindel's name, rank and the date it was made, June 30, 1757, and features a verse:

"I powder with my broth ball
A heroe like do Conquer all
Tis best abroad with foreign foes to fight
And not at home to feel their hateful spite
Where all our friends of every sex and age
Will be exposed until their creuel rage."

"It ended up in Michigan in 1833 and was used for bear, wolf hunting and was a family heirloom," Rugh said. "It was on loan to Dearborn and the evening before the exhibit was supposed to open, it disappeared."

In 1991, the powder horn appeared for auction at Christie's Auction House and was sold to an unknown buyer, officials said.

In 2017, the Dearborn Police Department asked the FBI for help and the bureau located the horn with their team in Philadelphia in November.

"I find powder horns to be incredibly important pieces of American history because those who carry them are able to leave their impressions about that time period carved on these artifacts," said Jake Archer, special agent with the FBI Art Crime Team in Philadelphia.

The powder horn is an embodiment of the time, Archer said, "and we were able to restore this to the city of Dearborn so it can be further studied."

The horn will be on short-term display through the spring at the Detroit Historical Museum, after which it will be permanently placed in the museum's "Frontiers to Factories" exhibit that focuses on the city's early history, Rugh said.

Jake Tate, acting chief curator for the Dearborn Historical Museum, said the horn was stolen about the time he arrived at the museum.

"It's been a conversation here for all these years and I just feel very fortunate to still be here when it returns,"  he said.

John Bendzick of Dearborn was excited to see the much talked about artifact.

"We heard they found it in November and it's came up at every community meeting we've had since," said Bendzick. "It's got beautiful colorization and engraving. Whoever did this took hours to engrave and polish it ... hours and hours. I hold two art degrees and to see this is just beautiful." 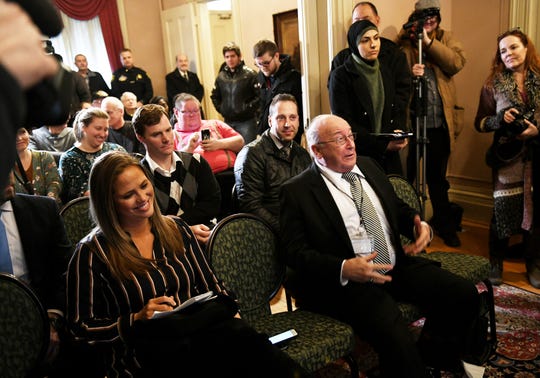 Jack Tate, right, acting chief curator of the Dearborn Historical Museum at the time the artifact disappeared in 1952, expresses his excitement at seeing the artifact found during his lifetime. (Photo: Robin Buckson, The Detroit News)