Drunken driver gets up to 15 years in daughter's death

Judge Michael Hathaway called the prison term he gave Wilburt Thomas, 48, "a sound and just resolution of this matter"

Drunken driver gets up to 15 years in daughter's death

Wilburt Thomas, 48, standing with his attorney Lillian Diallo, gives an emotional statement during his sentencing in the death of of his 7-year-old daughter DeSandra Thomas, who was killed in a car accident. (Photo: Clarence Tabb Jr., The Detroit News)

The father of a 7-year-old girl who was hit and killed on Interstate 94 after he crashed their car while driving drunk was sentenced Thursday to up to 15 years in prison.

Judge Michael Hathaway called the prison term he gave Wilburt Thomas, 48, "a sound and just resolution of this matter" and added that the case highlights the tragic loss of a child and the "bloodbath" that results from drunken driving incidents.

"They have tragic consequences way too often," Hathaway said during the hearing in Wayne County Circuit Court.

Authorities said Thomas had his daughter, DeSandra, with him while allegedly driving a stolen van on I-94 near Inkster Road in Romulus just before 2 a.m. on July 15 while he was under the influence of alcohol and marijuana.

The van crashed into a car on the shoulder of the road and struck a fence.

Thinking her father was dead, DeSandra grabbed her backpack, climbed over the fence the vehicle had struck and started walking from the scene near I-94 and Merriman, according to Michigan State Police.

In court Thursday, Thomas expressed sorrow over what happened.

"I'm very, very remorseful," he said. "I think about my daughter every day."

The girl's mother, Sandra Burts, cried while cradling a picture of her daughter, describing her as friendly, smart and generous. 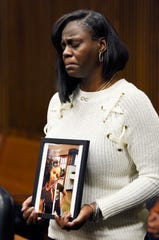 "We suffered a traumatic loss," Burts told the judge while surrounded by family members in the courtroom. "DeSandra was wonderful child. She smiled. She helped anybody she knew. I've been affected by this loss traumatically because this was my only birth child. She was a beautiful person."

Burts said after her daughter died, one of the girl's friends came to visit wearing a pair of DeSandra's shoes and explained they were a gift.

"When she passed, her best friend came over and she was wearing the shoes and she said to me, 'DeSandra said as long as you're my friend you never have to wear holes in your shoes,'" Burt said through tears.

Burts added: "I know I’m not the only one suffering from this loss ... her friends, her extended family. I'm sure her father loved her as well. This is traumatic for all parties involved."