Westland police seek cellphone burglar after display collapses on him

Surveillance video shows the man entering the store and stealing multiple cell phones, but not without a struggle

Westland police seek cellphone burglar after display collapses on him 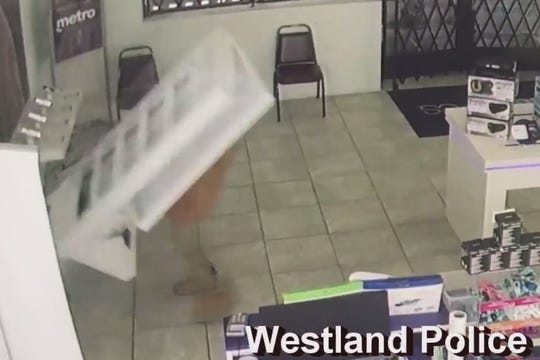 A man is shown on video entering a store and stealing multiple cellphones. In one instance, he attemps to pull a phone off its security tether, causing the display to fall on top of him. (Photo: Westland Police Department)

Westland — Westland police are seeking the public's help in identifying a man who broke into a cellphone store.

Surveillance video shows the man entering the store and gathering multiple cellphones, but not without a struggle.

As he tries repeatedly to yank a phone off its security tether, the display falls on top of him.

He's described as a man with pointed black facial hair on his chin who is wearing a tan jacket, tan pants, a black knit cap with a white circular logo and tan work boots.

If you have any information regarding this incident or are able to identify the subject in the video, contact Detective Farrar at (734) 467-7912.