Lawyers for a Dearborn man accused of fighting on behalf of ISIS want him to undergo a competency exam amid apparent mental deterioration. 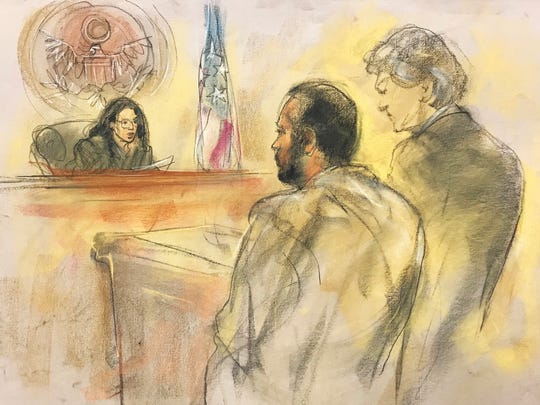 Ibraheem Musaibli of Dearborn is arraigned in federal court Wednesday. He was held without bond.  (Photo: Carole Kabrin)

Detroit — A Dearborn man trained by Islamic State fighters before being captured on a Syrian battlefield last year may be incompetent to stand trial on terrorism charges due to his worsening mental condition, his lawyers said.

Attorneys for Ibraheem Musaibli, 28, want him to undergo a competency examination and neuropsychological testing after noticing his deteriorating ability to comprehend advice and information, according to a federal court filing late Monday.

The request, unopposed by federal prosecutors, came one week after the government filed new charges against a terrorism suspect accused of using a machine gun while fighting on behalf of ISIS against coalition forces, including members of the U.S. military.

Musaibli's case presents one of the first times the Trump administration is using federal courts to prosecute a returning foreign fighter. Musaibli was brought back to Metro Detroit last year and charged with conspiring to provide material support to a terrorist organization.

"Since his initial appearance, Mr. Musaibli struggles to assist his attorneys with the defense of his case," defense lawyer James Gerometta wrote in the court filing. "Mr. Musaibli’s primary deficits relate to his ability to appreciate his current legal situation and his ability recall and process information.

"Because of this deterioration of his mental ability, counsel believes that Mr. Musaibli is presently unable to comprehend his current legal situation and assist properly in his defense...," Gerometta added.

A member of the Federal Community Defenders Office trained in forensic psychology met with Musaibli recently.

"She noted pressured speech (rapid or frantic speech patterns, with limited rational connection), a subrational response to questions, and a preoccupation with his own thoughts that overshadow his ability to communicate with counsel," his lawyer wrote.

If convicted, Musaibli faces at least 40 years in federal prison and up to life.

Musaibli was taken into custody by Syrian Democratic Forces in July while trying to flee the Middle Euphrates River Valley in northern Syria. At the time, he was believed to be one of only two male Americans captured alive on an Islamic State battlefield.

The indictment accuses Musaibli of knowingly providing support to ISIS since April 2015 and undergoing training at an ISIS military training camp. He also conspired to possess and fire a machine gun in support of ISIS, prosecutors said.

He used several aliases, including Abu Shifa Musaibli and Abu ‘Abd Al-Rahman Al-Yemeni, according to the government.

Musaibli is no terrorist but was lured by fellow Muslims into coming to Syria to study religion and work, younger brother Abdullah Musaibli said last year.