A preliminary investigation found the man was driving north on East River near Halcyon Court "at a high rate of speed."

Grosse Ile — A 20-year-old driver was injured Tuesday night after being ejected in a crash, police reported. 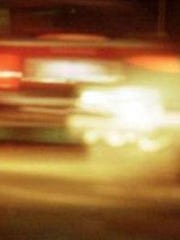 A 20-year-old driver was injured Tuesday night after being ejected in a crash, police reported. (Photo: The Detroit News)

A preliminary investigation found the man was driving north on East River near Halcyon Court "at a high rate of speed" about 8 p.m. when his vehicle crossed the center line and struck a large tree, authorities said in a statement.

Due to the seriousness of the incident, the Downriver Crash Response Team was activated to help with the investigation, according to the release,

The driver, the only person in the vehicle, was rushed to Beaumont Hospital in Trenton. His condition was not available.

It was not yet known if drugs or alcohol were a factor in the crash.