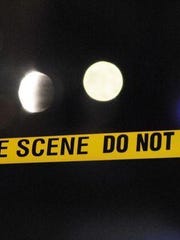 A Detroit homicide suspect was holed up in a Taylor home for nearly two hours Monday after refusing to surrender to authorities, police said.

A surveillance team had tracked the 37-year-old man, who was wanted in connection with a slaying reported last month, to the Heritage Glen Townhomes complex near Wick Road and arrived about 5:30 p.m. to execute an arrest warrant, said Officer Vanessa Burt, a spokeswoman for the department.

The group surrounded the unit and used a megaphone to order everyone there out; a woman left with a child and told them the suspect remained inside, holding a handgun, investigators said.

Authorities continued negotiating and tried reaching the man by phone but he did not respond, prompting the team to deploy tear gas at about 7:30 p.m., police told reporters. Minutes later, smoke and flames erupted at the unit before he fled from the back.

With help from Taylor police and the Downriver SWAT team, the suspect was arrested shortly after, Burt said. Meanwhile, neighbors were evacuated as Taylor firefighters extinguished the blaze, which was not believed to have been caused by the tear gas.

No injuries were reported and the fire was confined to the home where the suspect had been, Burt said. Neighboring apartments were not believed to have been damaged, she added.

The 37-year-old, who has not been named, remained in custody Monday night. Details on an arraignment were not available.