Ali Najim Al Sadoon appeared Monday in U.S. District Court in Detroit for a bond hearing in an orange jail jumpsuit and chains

Detroit — A 34-year-old Iraqi refugee who cut his tether to escape deportation has been captured and will spend a week in federal detention before a bond hearing next month.

Ali Najim Al-Sadoon, an Iraqi refugee who was scheduled last month to be deported for a 2012 conviction, appeared Monday in U.S. District Court in Detroit for a bond hearing in an orange jail jumpsuit and chains.

This comes four days after Department of Homeland Security investigators filed a complaint in federal court in Detroit against Al-Sadoon, alleging he removed his tether on June 23, the day he was set to be deported. 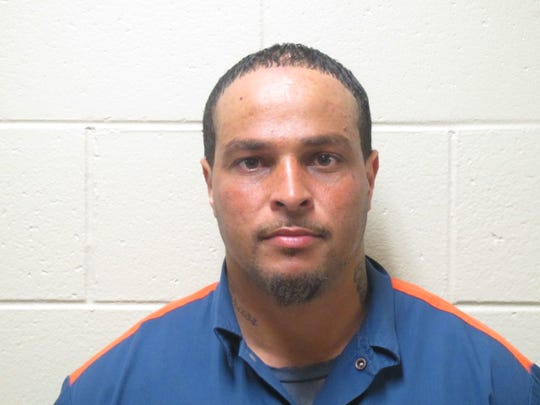 Federal officials allege Al-Sadoon cut his tether near the area of Interstate 96 and West Chicago Street. Officers recovered the tether the following day and said Al-Sadoon did not show up at Detroit Metro Airport for his scheduled deportation.

Khaalid Walls, a spokesman for ICE, said federal agents located Al-Sadoon in front of a home in Redford Township on Friday. As agents approached, Al-Sadoon ran inside the residence, locked the door and barricaded the front and back doors with furniture and appliances, Walls said.

Agents identified themselves as police with an arrest warrant but Al-Sadoon refused to open the door, Walls said  Agents forced entry and allegedly used his minor children and wife as a shield, Walls said. Agents then arrested Al-Sadoon.

On Monday, Al-Sadoon's attorney, Shanta Driver, asked for additional time to prepare for Al-Sadoon's case, telling U.S. Executive Magistrate Judge R. Steven Whalen she was just retained by the family and needs time to prepare. Al-Sadoon is scheduled to return to court on Aug. 5. 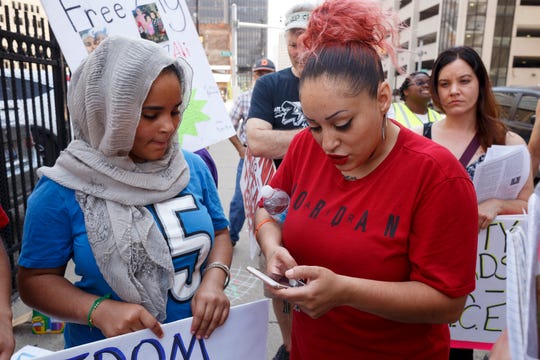 Driver said Al-Sadoon has spent most of his life in Michigan and has six U.S. citizen children. She said he cut his tether because he could not accept returning to Iraq.

"This is as close to a death penalty case as I have ever had. His brother returned to Iraq four years ago and no one has ever heard from him," Driver said after court.

Al-Sadoon's wife, Belqis Florido, attended the court hearing with two of their children and said her husband has been at their home in Redford Township since cutting the tether. Florido said her husband was hugging his children who were clinging to him when police stormed into their home to arrest him, and he was not using them as shields.

He wants a second chance to prove he should stay in the United States, Florido said.

"They sentenced him to death," Florido said of her husband's deportation order. "His mom was also in the hospital when he did this. He wants a second chance. He can live as a refugee."

In 2013, Al-Sadoon was charged with a breaking-and-entering crime from which Immigration and Customs Enforcement officials charged him as removable from the United States. His removal orders were approved by a judge while he was serving time for the crime in 2015, according to the DHS complaint.

During that time, Al-Sadoon became a plaintiff in Hamama v. Adducci, a nationwide class-action lawsuit brought by the ACLU of Michigan in 2017. The ACLU lawsuit was filed after more than 1,400 Iraqi nationals nationwide — 114 from Michigan — were swept up in the raids during the summer of 2017.

Al-Sadoon's motion to reopen his immigration case was denied in November 2017.

Miriam Aukerman, an ACLU of Michigan senior staff attorney, said Al-Sadoon withdrew his appeal because he couldn't afford his attorney through the lengthy process.

He was held in the Michigan Department of Corrections while it was uncertain if Iraq would accept any detainees amid being removed from Trump's travel ban list of Muslim-majority countries. 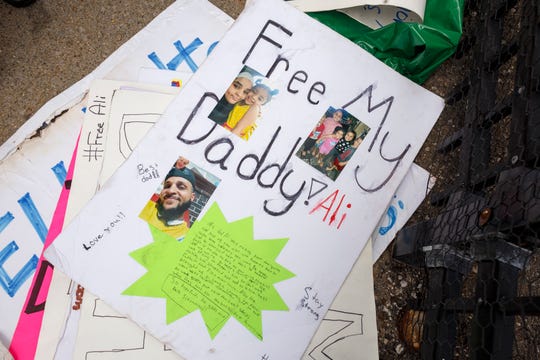 Some Iraqi nationals, including Al-Sadoon, were released in December after years in detention based on the ruling by U.S. District Court Judge Mark Goldsmith, who said ICE could not indefinitely detain foreign nationals while seeking to deport them.

The civil liberties organization argued that if the detainees were repatriated to Iraq, they would face torture or death for their Christian faith, having served in the U.S. military or seeking U.S. asylum.

Al Sadoon was placed on a GPS tether, and in March, Iraq issued travel documents for his return on June 24, according to an affidavit by Shadi G. Elreda, a special agent for Homeland Security Investigations.

According to the complaint, Al-Sadoon appeared as instructed at ICE offices on June 21 where he was given instructions regarding his removal.

Aukerman said on Monday that the State Department has evacuated all non-essential American personnel from Iraq because it is so dangerous.

"Yet the administration is simultaneously trying to deport longstanding members of our community to Iraq, even though they face persecution, torture and death," Aukerman said. "Basic fairness means that no one should be deported to such a fate without having their case individually heard. "

Aukerman said her office is seeing deportations happening even where immigration courts have not been able to decide emergency motions.

"A fair process takes time, which is why it is so critical that Congress pass the bipartisan bill to pause Iraqi deportations. Many Iraqis have won their immigration cases, but they need time to do so,” Aukerman said.

Al-Sadoon has a lengthy criminal record, among the felony cases he's faced:

Wayne County Circuit Court records show that Al-Sadoon was sentenced to 3½ to 15 years in February 2012 after taking a plea deal for safe-breaking. Al-Sadoon served another sentence, of the exact same length, owing to a May 2012 plea deal for breaking-and-entering.

In 2004, he was sentenced to probation for unlawful use of a motor vehicle. In 2007, he was given probation again in two cases, one for larceny, the other for breaking-and-entering with intent.

In 2008, he received probation for entering without permission, and in 2009, probation for two counts of third-degree fleeing and eluding.

On Monday, outside of the federal courthouse, Florido said her husband regretted his criminal past.

"I'm pretty sure if he knew this was the outcome, he never would've done it," Florido said. "He knows he messed up."

Florido, and twins, Ayana and Muhammed, spoke on his case.

The twins haven't seen much of Al-Sadoon, who went to prison when they were 5, and he only returned about seven months ago.