The effort comes as Wayne County is in the midst of building a new jail that is scheduled to open in 2022.

While the work of Gov. Gretchen Whitmer’s task force on jail and pre-trial incarceration has just begun, a similar effort specific to Wayne County has been going on quietly for months.

The Wayne County effort, which participants call an advisory commission, is funded by a $94,000-plus grant from the Hudson-Webber Foundation, which tapped the New York-based Vera Institute of Justice for technical assistance.

Vera is working to gather data on Wayne County's county jail system and what purposes it is used for. Its findings will be presented to county policymakers by year's end. 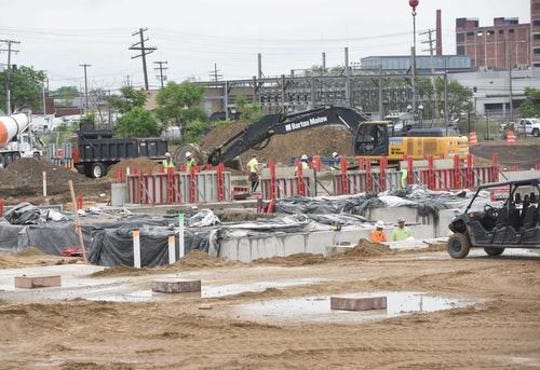 Construction crews work at the site of the $533 million future justice complex on East Warren near Interstate 75 in Detroit. (Photo: Max Ortiz / The Detroit News)

Those policymakers include a who's who of leaders in the criminal justice system in Wayne County, including the sheriff's office, which operates the jail system; the office of County Executive Warren Evans; the Detroit Police Department; the Wayne County Commission; the Third Circuit Court; the county’s criminal defense bar association, the State Court Administrative Office, and the Detroit Wayne Mental Health Authority, among others, said Melanca Clark, president and CEO of the Hudson-Webber Foundation.

The effort comes as Wayne County is in the midst of building a new jail that is scheduled to open in 2022.

In 2017, there was an average of 650 people per day supervised through electronic tethers. That budget document cited general fund savings of $30 million, or 237,250 bed-days, as a result of monitoring those people rather than jailing them.

Right now, Wayne County is building a jail 671 beds smaller than its current facilities — 2,280 adult beds compared to the 2,951 beds the jail system has currently. To the extent it wouldn’t compromise public safety to do so, county officials would like to see those numbers brought lower.

Timothy Kenny, a participant in the local effort and chief judge of Third Circuit Court in Wayne County, used a metaphor to describe a push to rightsize the Wayne County Jail population.

"If I’ve got a jar that has 50 marbles, but the jar will only hold 25, the question is, which of those 50 marbles do I want to put in that 25-marble jar?" Kenny said. "We can’t just keep building bigger and bigger jails or more and more prisons. That’s not smart justice."

Lillian Diallo, a Detroit-based defense attorney and vice president of the Wayne County Criminal Defense Bar Association, sits on the committee and said she is "guardedly optimistic" about its work.

Robert Dunlap, chief of jails for Wayne County, told The News that efforts to lower the county's jail population have been in the works for years.

Some 80 percent of incoming inmates, Dunlap said, have a "nexus or connection to mental health or substance abuse issues," which is why Sheriff Benny Napoleon tapped the inmate commissary fund five years ago to help get treatment for those who need it.

In that time, the county has spent about $3.5 million on mental health or substance abuse treatment for those affected. This, the county believes, is preferable to the "revolving door" of people whose only exposure to treatment is in jail, and whose condition can backslide when they're not in the system.

The county group is more under-the-radar than the statewide effort that drew more than 100 people to its first public meeting in July. But both operate on the same model, wherein policymakers are informed by the technical assistance of outside groups — Vera Institute for Wayne County, Pew Charitable Trusts for the statewide — and are about the same size.

“The prospect of a new jail presents a critical opportunity for stakeholders and policymakers that make decisions that impact the jail to examine the drivers of the jail population, and to review policies and practices in the local system that impact local incarceration,” Clark said in a statement.

“Our hope is that Vera’s comprehensive study will provide data that can inform new approaches for protecting public safety while addressing fairness and equity, efficiency and issues of community public health.” 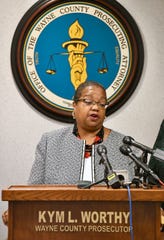 Worthy cautioned that the perspective of crime victims be considered as officials ponder decarceration: "It is my earnest hope that as we move forward we give thought, deliberation and consideration of the input of all areas of the criminal justice system — especially the safety of the public.  Too often when any aspect of criminal justice reform  is discussed, the needs and rights of the victims of crime are forgotten and discarded."

Kenny echoed a question asked by Lt. Gov. Garlin Gilchrist II at the first meeting of the statewide task force.

“Are these inmates people we’re mad at or afraid of?” Kenny asked.

The effort is in a “data-gathering” stage right now, Clark said. Once sufficient data is compiled, the group will hold at least one public meeting in the fall, and by year’s end, it will release a report offering recommendations.

“Best practices” from other jurisdictions that have undertaken reforms have been and will be part of the discussion, Kenny said. But in the end, elected and appointed officials will have final say on how Wayne County shapes its jail population.

“We’ve tried to include as many of the stakeholders as we possibly can,” Kenny said. “If you do come up with a solution, and people haven’t been at the table, they feel they’re getting something jammed down their throats.”