Grosse Pointe — Family gathered Saturday for a celebration of life ceremony remembering two young boys killed in a fire that swept through their home Monday morning.

A framed photo of Logan Connolly, 9, and Briggs Connolly, 11, sat at the center of the ofrendas, an altar surrounded by pink and orange flowers, candles and things that they loved including drawings, hockey skates and a box of Cheerios.

The Grosse Pointe Academy Field House was filled for the brothers' funeral in accordance with Día de los Muertos (Day of the Dead), which is celebrated from Oct. 31 until Nov. 2. 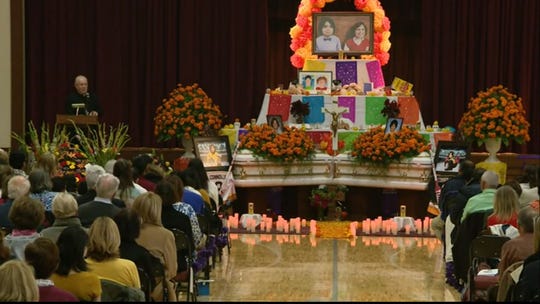 A framed photo of Logan Connolly, 9, and Briggs Connolly, 11, sat at the center of the ofrendas, an altar surrounded by things that they loved including drawings, hockey skates and a box of Cheerios. (Photo: The Detroit News)

Family friends dressed in Red Wings jerseys joined together in song, "When Irish Eyes Are Smiling."

The brothers died of smoke and soot inhalation, and their deaths were accidental, the Wayne County Medical Examiner's Office said Thursday.

Just before sunrise on Monday, neighbors saw smoke and then heard screams for help coming from a home on Fisher Road, where the boys lived with their parents. Firefighters found the first floor fully engulfed. Once firefighters entered, a search of the home revealed the bodies of the two children in an upper bedroom.

Stephen Poloni, Grosse Pointe Public Safety director, confirmed the fire started in the kitchen. He couldn't say with certainty that a toaster in the kitchen of the Grosse Pointe home sparked the deadly blaze but it was among appliances from the kitchen being sent out for testing as part of the investigation into the fire.

The brothers deaths prompted a "sticks out" tribute across Metro Detroit's hockey community. The brothers were hockey players. 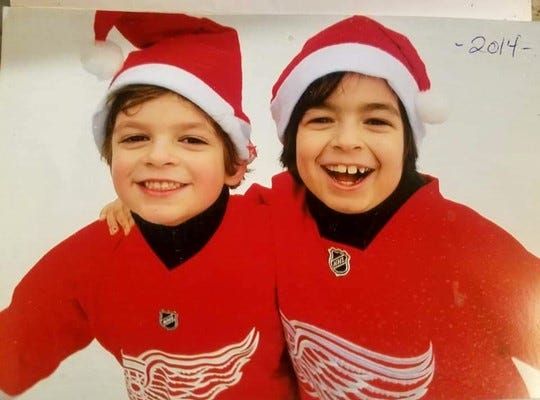 Their father, Walter Connolly, took the podium to address the full gymnasium saying he'd like to express his gratitude for all who have paid their respects, but also to the hockey world.

"NHL players are often too lauded for checks, pass, safe and wins, but not the utmost courage and class as models for young people," he said. "When my sons watched games, I said you don’t have to be a professional hockey player, but you do have to be like the Steve Yzermans … off the ice. I’m told there are hockey sticks on porches all over the country and I'm grateful."

Briggs had a selflessness that made his father smile. When he couldn't play hockey after his surgery, he insisted on going to each practice to cheer on his teammates.

"On Sunday night, we sat at family dinner and he was beaming," he said holding back tears. "So proudly because he was going to get the hardhat from the team. He said, 'and I get to put my name on it.'"

He said Briggs was an artist while Logan was "the boy with the soul of a clown."

"Unfortunately, there were a number of people in the room," he said laughing with the crowd.

Lastly, Connolly asked people not to feel uncomfortable or pity them.

"Instead of thinking how sad, there are the parents who lost their boys ... think there go the mother and father who experienced unconditional love ... for 9 and 11 years," he said.