Detroit — The Fort Street bridge over the Rouge River near Oakwood is back down after it became stuck in an up position, Michigan Department of Transportation officials said. 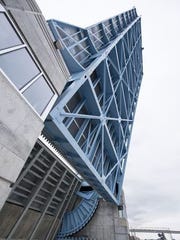 MDOT said Wednesday the Fort Street bridge over the River Rouge is stuck in its up position and the road will be closed for at least a few hours. (Photo: Detroit News file)

Northbound and southbound Fort between Miller and Oakland have reopened about 1:30 p.m. Wednesday. The road was closed for about an hour.

Diane Cross, a MDOT spokeswoman, said the bridge had been expected to be out of service for a few hours.

"They lifted the bridge to let a ship sail underneath and it got stuck in the up position," she said. "We've got some specialist technicians coming out to look at it."

MDOT said the bridge is the oldest of a set of a dozen bascule bridges erected on the Rouge River in the 1920s to allow shipping to use the river for access to the Ford Motor Co. River Rouge manufacturing complex. It was built by the Chicago Bascule Bridge Co.

It was rebuilt in 2013 in a project that included reconstructing Fort Street between Miller Road and Powell Street, upgrading utilities, and replacing the double-leaf bascule bridge with a single-leaf-style that includes overhead counterweights.

An average of 3,000 vehicles travel northbound and southbound Fort Street between Miller and Oakland, according to the latest traffic counts compiled by the Southeast Michigan Council of Governments.

Bridge is back open