Kim Trent to depart Wayne State board amid fracture

Trent's departure comes as the WSU board is split between supporters and opponents of President M. Roy Wilson

Kim Trent to depart Wayne State board amid fracture

Detroit — During a time of great discontent within Wayne State University's Board of Governors, its chair stepped down on Thursday, and a longtime Detroit activist has stepped in.

Kim Trent, a communications professional and Democratic party operative, is departing her post to work for the administration of Gov. Gretchen Whitmer in the Department of Labor Economic Opportunity leadership team starting in January, the governor announced. 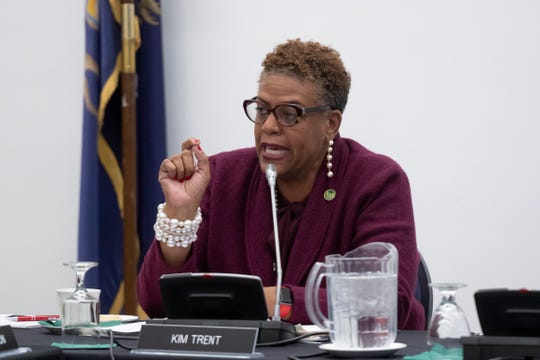 Replacing her on the university board will be Shirley Stancato, the retired president and CEO of nonprofit New Detroit, a coalition working for racial understanding and equity in Detroit.

Stancato, who earned her undergraduate and graduate degrees at Wayne State, presided over many initiatives during her 18-year-tenure at New Detroit aimed at improving Detroit race relations.

Prior to joining New Detroit, Stancato had a long career at Chase Bank that began in college. She eventually became the bank's senior vice president.

Whitmer said Stancato's leadership is key during the tumultuous time at Wayne State.

“It’s imperative to have someone on the board who will focus on addressing the problems that are currently facing Wayne State, we must put the students first," the governor said.

"I believe that Shirley will work with the board through civil and respectful discourse, to ensure that Wayne State University is focused on providing a high-quality education to each student.”

Trent's departure and Stancato's arrival come as the Wayne State board is split, 4-4, between those who support President M. Roy Wilson and those who don't. Trent supports Wilson, and Stancato's initial statement appeared to show she backs the university's president as well.

“I’ve watched with admiration as President Wilson and his team have elevated the university’s stature and public profile, and helped turn it into one of the best urban research universities in the nation," Stancato said. "I’m excited to be a part of the university’s continued success."

"Moreover, President Wilson’s commitment to improving the graduation rate of Wayne State students — especially among African Americans — has made a tremendous difference in providing Michigan with a highly educated influx of new talent.”

“Kim has been an outstanding leader and board chair," he said. "Her passion and dedication to Wayne State have allowed us to accomplish many great things.”

Trent, who was elected chair in February, said she will miss her work at Wayne State.

"I’m excited about this new opportunity, especially since I share Gov. Whitmer’s vision for a stronger and more vibrant Michigan,” Trent said in a statement. “At the same time, I feel some sadness to be leaving Wayne State, a university I believe in and have been committed to serving for a long time. We’ve had our troubles over the past year or so, but I’m confident the board will work together to support our great institution in the months and years ahead.”

In Trent's absence, board Vice Chair Marilyn Kelly will act as chair until the board elects a new chair and a vice chair at the Jan. 31 meeting, said Wayne State spokesman Matt Lockwood. Kelly also supports the university's president.

"Kim Trent was a great chair during a difficult time," said Wayne State Governor Mark Gaffney, a Wilson supporter. "She always impressed me with her commitment to Wayne State."

"Chairman Trent has provided exemplary service to the Wayne State community, and to the community of Detroit and state as a whole," Barnhill said. "That is underscored by Gov. Whitmer finding it suitable to bring her on board to serve in an even greater capacity."

He added he had high hopes for Stancato's leadership.

"She has also has served the community for a number of years," Barnhill said. "She has a great reputation in the community ... and I am looking forward to learning from her."

Governor Sandra Hughes O'Brien, who is part of the faction opposed to Wilson's leadership, welcomed Stancato to the board while wishing Trent well in the Whitmer administration.

Shirley Stancato, president and CEO of New Detroit, notes that people of color now have jobs in industries that they didn't before, but in other ways, such as education, Detroit and Michigan have a long way to go.

"We wish our former colleague the best in her new position and look forward to welcoming Ms. Stancato on board. We've much to accomplish," O'Brien said.

A Democrat and Detroit native, Trent was elected to the Board of Governors in November 2012, and her term expires Dec. 31, 2020.

Last month, the four-member faction of the board against the university president believed it fired Wilson at a meeting, a move opponents said had no legal standing because it did not occur in a formal meeting.

The Michigan Attorney General's Office issued an opinion last week that the Nov. 5 vote by the four board members to fire Wilson did not occur at a properly convened meeting.

The board's schism began about a year ago, when Wilson's contract passed 5-3, and the faction that opposes his leadership torpedoed university officials' plans to make the Henry Ford Health System the school's primary medical partner.

One half of the board also boycotted a June meeting that led to the other half putting Wilson in as a non-voting ex officio board member, leading to a vote that has since been challenged in court.

The board also deadlocked 4-4 in September on whether to adopt a proposed code of conduct for itself, and a vote on the issue at last week's meeting ended in an identical tie, defeating the measure.

Both times, Wilson supporters backed the measure, while the rest of the board opposed it.