U.S. Ecology to temporarily store PFAS at its facility on Georgia Street in Detroit

Detroit — State representatives and environmental activists gathered Friday to protest the expansion of a waste facility that's storing PFAS, saying it poses a danger to the community. 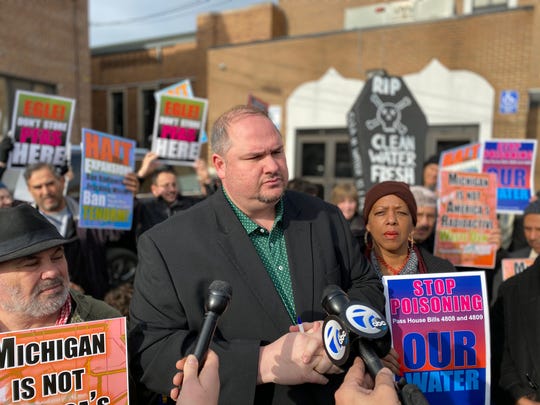 The state contracted with the firm, U.S. Ecology, to dispose of PFAS after Michigan identified more than 30 contamination sites that tested positive for PFAS last year.

Robinson said EGLE is planning to issue a permit to allow a U.S. Ecology disposal facility, located at 6520 Georgia Street, to expand to a 660,000-gallon tank capacity.

Robinson said the facility should not be so close to a mosque.

"It's unheard of. We should learn from Flint. We should be proactive," he said.

U.S. Ecology applied for a license renewal and expansion of the facility in March, and EGLE officials say they accepted public comments until April 12. A final decision has not been made on the expansion license application, EGLE officials told The Detroit News on Friday.

The facility has been operating since the 1940s and waste management has been conducted at the site since 1974. Under its license, the compacity would increase from 41,000 gallons to 600 tons per day.

"The treated wastewater would be discharged to the GLWA sanitary sewer after treatment and all treated solidified waste would be disposed off-site at an appropriately licensed off-site disposal facility," according to MDEQ.

U.S. Ecology informed community members on Dec. 18 that PFAS is being stored at their Detroit North facility on Georgia Street. EGLE said the facility is temporarily storing PFAS until it can be shipped to Idaho where it will be treated and landfilled.

He fears the handling of more PFAS would be a threat to the water system. 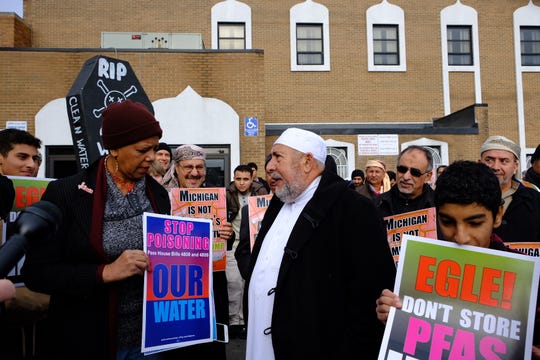 PFAS are chemicals widely used to create non-stick surfaces including firefighting foam, Scotchgard, Teflon and food wrappers that are resistant to water, grease or stains.

The chemicals don't break down in the environment and build up over time in blood stream and organs, according to EGLE. There is evidence that exposure to PFAS can lead to adverse human health effects and have been linked to thyroid disease, increased cholesterol levels, and kidney and testicular cancers, according to the EPA.

"The terrible part is the companies that dump on us are the ones that get hired to clean it up," Robinson said. "So we're calling on EGLE to reject this ten-fold expansion of a hazardous waste facility here in this urban center."

The protest comes after a statewide push to collect firefighting foam that contains PFAS was launched earlier this month at a fire station near Lansing. The state initiative will cost $1.4 million to collect 30,000 gallons the foam containing PFAS and dispose of it to ensure the chemicals in the foam won't make their way into Michigan's water systems.

"Stop dumping in Detroit is what we are demanding," Johnson said. "It just seems like Detroit is the dumping site. We're talking about storing toxins, poisons in our city, and we're tired of it." 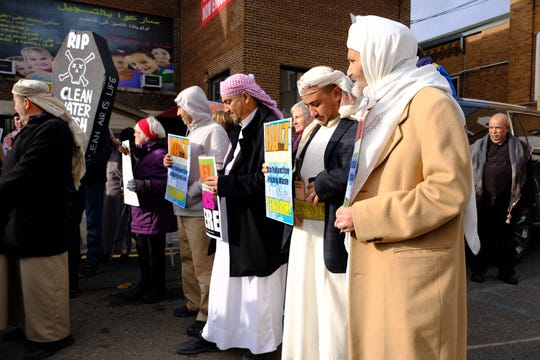 The protest was held at the local mosque Masjid Mu'ath Bin Jabil, following Friday prayer and was attended by about 35 people. (Photo: Sarah Rahal, The Detroit News)

Sister Barbra Beesley held a sign that said: "Even Scrooge woke up." She said it's a shame companies are "putting policy and dollars ahead of people."

"I'm just about a mile away, but I drive down Mount Elliott frequently and (there's) huge trucks all over," said Beesley, 81. "There's a Christmas story that I just want to repeat. It's a classic story about a man named Scrooge, who thought about money, business; who didn't think about people. He got changed, and this is the message that many of us want to bring to the U.S. Ecology and EGLE."

Robinson said they're calling on Gov. Gretchen Whitmer to "prioritize this crisis."