After Jorge Garcia's homecoming in Lincoln Park, his wife says, "No family needs to go through what me and my family have gone through"

U.S. Rep. Debbie Dingell called Friday for the United States' "broken" immigration system to be fixed following the return of a Lincoln Park man from Mexico, where he had been deported for two years, despite being married to a U.S. citizen and having lived here for nearly 30 years.

Jorge Garcia, 41, returned Christmas Day from Mexico City to Michigan, his wife and two teenage children with permanent residency. The homecoming concluded a long, expensive and emotional journey for the Garcia family that has turned them into activists to help others who are facing similar circumstances — and advocate for a permanent solution on the divisive topic of immigration. 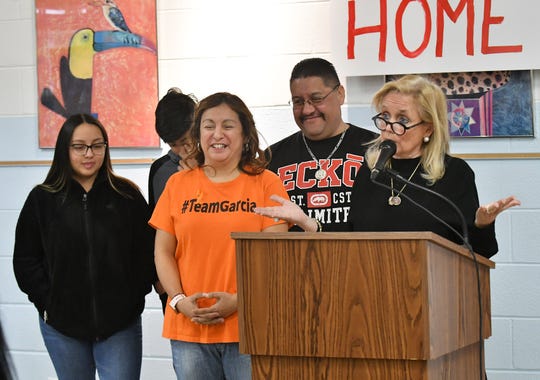 Cindy Garcia, in orange, and her husband, Jorge Garcia smile while U.S. Rep. Debbie Dingell speaks at a press conference about the return home of Jorge Garcia at the Lincoln Park Public Library in Lincoln Park, Mich. on Jan. 10, 2020. From left are Garcia children, Soleil, 17, and Jorge Jr., 14. (Photo: Robin Buckson, The Detroit News)

"What this is the message of is why we've got a broken immigration system that we've got to fix," the Dearborn Democrat said in front of a "Welcome Home Jorge" sign during a press conference at the Lincoln Park Public Library. "I want today to be a day of hope, of welcoming people back, but also to be realistic that until we really fix this system, there are too many families that are torn apart."

Garcia's family has fought since 2004 to keep him in the country because he had no criminal record — not even a traffic ticket, Dingell emphasized. A trial in immigration court failed. And although Garcia came to the U.S. with his parents when he was 10, he was one year too old to qualify for Deferred Action for Childhood Arrivals protection.

"That is why we have to do something about DACA," Dingell said. "We have too many young kids that I know, they have never lived any place else. They are American in everything they do: where they go to school, their friends are here, they've fallen in love, they have jobs, they pay taxes, they're serving in the military. We have to have the courage as Americans to do something about it."

Garcia's wife, Cindy, is doing something about it. Her experience fighting the system that tore apart her family has inspired her to pursue what she believes is her purpose.

"This needs to stop," Cindy Garcia said. "No family needs to go through what me and my family have gone through."

Although Jorge Garcia applied to obtain permanent residency, that action put him on the federal government's radar, Cindy Garcia said. U.S. Immigration and Customs Enforcement tried to deport him in 2009 and in 2011 when then-Rep. John Conyers stepped in to help.

"Finally, Immigration said, 'You have to let this gentleman go in order for him to return,'" Cindy Garcia said. "I couldn't take it. I broke down at the immigration office."

Although the family was able to video chat and talk on the phone while Jorge Garcia was living with a friend, he missed major events like birthdays, including his daughter's quinceañera — a cultural celebration honoring a girl turning 15 and entering womanhood.

"There's typically a father-daughter dance," said Soleil Garcia, who is now 17. "I danced with my grandpa, and I am thankful that I could do the dance with my grandpa, but it would have been even more special if my father had been there. ... It was hard. There were a lot of tears." 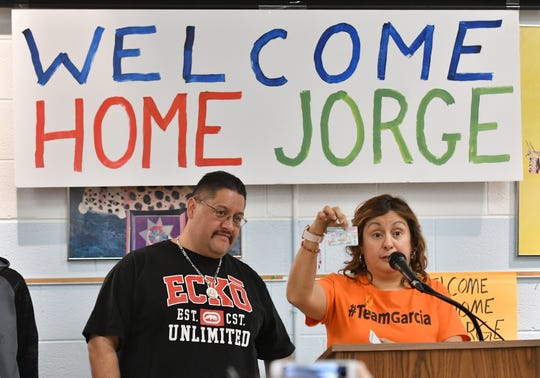 Jorge Garcia wasn't expected to return for 10 years, but he received a waiver to return early because of help from U.S. representatives, the nonprofit Michigan United, the United Auto Workers and others in the community and across the country.

"It was very stressful," Jorge Garcia said. "Although (Mexico) is the country I was born in, basically I don't know anything about it. Basically I didn't call it home. I didn't call Mexico home. The U.S. is my home. I grew up here. My family is here."

Cindy Garcia says she frequently hears from other desperate families trying to find a way to bring home loved ones who have been deported or are facing deportation.

She says she wants to help others in any way she can because of the support her family received. Recently, she said she was involved with stopping a raid in Wyandotte seeking a 16-year-old. With her husband home to help with her children, she hopes to do even more.

"I have to step up and defend other people who are going through this, who need help and don't know where to turn to, don't have the avenues that I have," Cindy Garcia said. "I want every family to be together, not just ours. Everybody that can be together needs to be together, especially for the kids' sake."