Exhibit to open March 28 and run through Sept. 7

Dearborn — The Henry Ford's next big draw — an exhibit about Marvel Comics.

Officials for the museum said Tuesday an exhibit called "Marvel: Universe of Super Heroes" will open at the Henry Ford Museum of American Innovation on March 28. 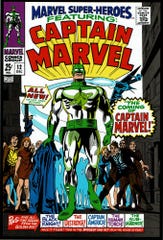 The show will feature more than 300 artifacts, including Marvel’s earliest comic book, iconic props and costumes from film favorites, and rare, hand-drawn images of iconic heroes by the artists who created them. It will run through Sept. 7.

“Marvel revolutionized storytelling by giving Super Heroes real struggles that audiences could identify with,” Patricia Mooradian, president & CEO of The Henry Ford, said in a statement.

“Their larger-than-life characters have impacted those young and old for the past 80 years and have proven to bring us together not just generationally, but globally. We are honored to host the Midwest premiere of this awe-inspiring exhibition and bring these iconic heroes to life.”

Tickets are on sale at the museum's web site.