"The residents of Wayne County and Detroit have been preyed upon under the flimsy legal pretenses" of civil forfeiture law, Wesley Hottot says

Detroit — The lead attorney for two residents who are suing Wayne County over its vehicle seizure and civil forfeiture practices said Wednesday that federal complaint is aimed at stopping "seize and ransom" activities against motorists.

Wesley Hottot of the Institute of Justice, a nonprofit public interest law firm, discussed the lawsuit filed in U.S. District Court during a news conference outside the federal courthouse downtown, accompanied by the plaintiffs, Melisa Ingram and Robert Reeves, who spoke about how the seizure of their vehicles affected their lives. 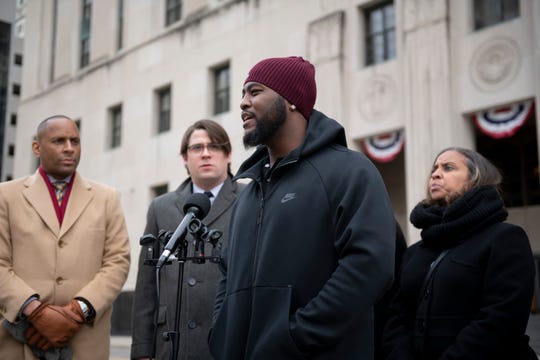 Robert Reeves speaks about his experience having his vehicle impounded despite not committing a crime during a press conference by the Institute for Justice in front of the Theodore Levin U.S. Courthouse, in Detroit, February 5, 2020. The institute announced a class action lawsuit to ask for the end of civil forfeiture in Wayne County. (Photo: David Guralnick, The Detroit News)

"For too long, the residents of Wayne County and Detroit have been preyed upon under the flimsy legal pretenses" of civil forfeiture law, Hottot said.

The suit, filed late Tuesday, says Wayne County's vehicle seizure and civil forfeiture practices are unconstitutional, unreasonable and unfairly target residents who have not been charged with crimes.

Maria Miller, the spokesman for the Wayne County Prosecutor's Office and an assistant prosecutor, said Wednesday, “It is the longstanding practice of WCPO not to comment on pending litigation outside of court. The matter will be addressed in court by our legal representatives.”

James Martinez, a spokesman for the county, said in an email: "We have no comment at this time on any potential pending litigation."

The Institute of Justice argues that despite the plaintiffs having done nothing wrong, the county has deprived them their vehicles "for half a year or longer."

The lawsuit asserts Reeves has been waiting months to free his 1991 Chevrolet Camaro, two cell phones and $2,280 in cash seized in July. Police approached the Detroit man after he met with an acquaintance they believed had construction machinery allegedly stolen from a Home Depot.

"I feel like I was robbed," Reeves said at  the news conference. "I'm fighting back 'cause I don't want anyone else to go through what I went through.

"It's affected my entire life," he said. "It's been very hard for me and my family." 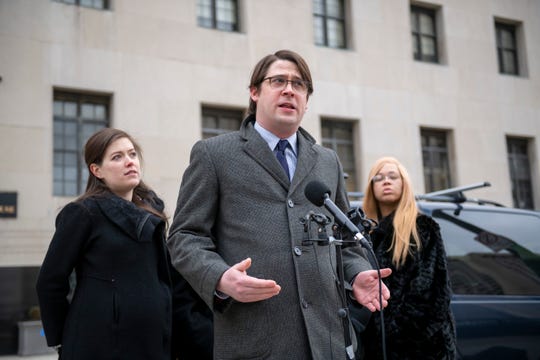 Attorney Wesley Hottot speaks during a press conference by the Institute for Justice in front of the Theodore Levin U.S. Courthouse, in Detroit, February 5, 2020, to announce a class action lawsuit to ask for the end of civil forfeiture in Wayne County. (Photo: David Guralnick, The Detroit News)

Officers did not arrest anyone in connection with the alleged theft, and “in the more than six months since, no forfeiture complaint has been filed against Robert’s vehicle (and other property), and there has been no opportunity for him to contest the seizure,” his attorneys wrote in the filing.

Reeves received no answers from the Vehicle Seizure Unit, and his attorney also was ignored, according to the document.

Sheriff’s deputies allegedly took Ingram’s 2017 Ford Fusion on two occasions when her then-boyfriend borrowed it: first, when he allegedly picked up a prostitute and, about six months later, as the man left a barbecue at a home that authorities claimed was “in some way, connected to drugs or prostitution,” according to the filing.

The first time, Ingram paid more than $1,300, including towing and fees, to have her car released. The second time, as the single mother faced bankruptcy as a result of the first seizure of her car, the Vehicle Seizure Unit demanded she pay at least $1,800, the suit claims.

“If not for the first seizure of her car, Melisa would not have declared bankruptcy,” the document stated. “The second seizure only compounded her financial problems and led her to release the vehicle to Ford in bankruptcy.”

“In many ways, Melisa was victimized twice: First by her partner and a second time by Detroit’s outrageous vehicle forfeiture program, which turns a blind-eye to the innocence of owners,” Hottot said in a statement. 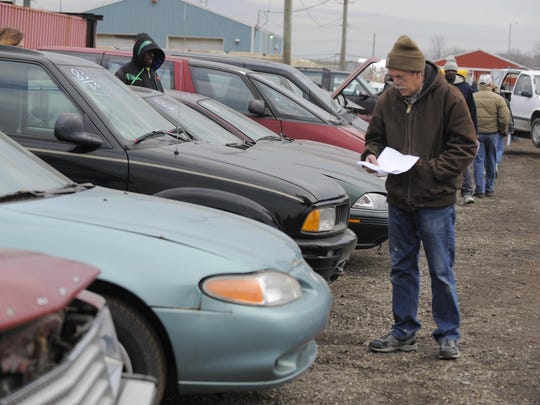 A federal lawsuit was filed against Wayne County challenging its vehicle seizure and civil forfeiture practices, which attorneys say are unconstitutional, unreasonable and unfairly target residents who have not been charged with crimes. (Photo: The Detroit News)

Ingram said she's part of the lawsuit and sharing her story because she doesn't want anyone else to experience what she has. Ingram's ordeal, according to her and the lawyers, has created a financial hardship and has forced her to catch buses because she can't get another vehicle.

The suit follows lengthy efforts by state officials to reform civil asset forfeiture laws, which had allowed police to seize and sell property seized if there was reasonable cause to believe it was related to a drug crime.

In May, Michigan Gov. Gretchen Whitmer signed into law bipartisan legislation requiring a conviction before police can permanently confiscate property in most cases. Other bills signed require the government to notify a person that his or her property has been seized and to return that property within 14 days if the forfeiture is not justified.

The suit claims the seizure of Ingram and Reeves' cars are “part of a broader policy and practice under which the county seizes vehicles, including from innocent owners, fails to provide adequate notice or opportunity to be heard, and continues holding them until the owner pays a 'redemption fee,' towing and storage fees.”

Citing a Michigan Capitol Confidential article, the plaintiff’s lawyers allege the county “has forfeited no fewer than 2,600 cars and collected not less than $1.2 million in revenue.”

Attorney Barton Morris, who also represents the plaintiffs, said while Wayne County has most of the complaints there also have been concerns about forfeiture policies used by law enforcement agencies in Oakland and Macomb counties.

The Institute for Justice said Tuesday that in response to other lawsuits the group filed, federal judges in Albuquerque and Philadelphia have shut down similar municipal forfeiture programs.