Traverse City — The lack of snow and cold is beginning to bite into northern Michigan’s economy.

It’s affecting sales of snowmobiles, skis and other winter sports equipment, keeping ski slopes closed and delaying the formation of ice, forcing those who like to ice fish to stay on dry land.

“This warm weather is certainly abnormal,” said John Boris, a meteorologist with the National Weather Service in Gaylord. “But it’s not unprecedented.”

It’s not just an “up north” thing; the weekend brought record high temperatures to southeast Michigan.

Still, it’s not all bad news for one Gaylord ski resort or for guests who would find it amusing to do a summer and winter sport on the same day.

“If you have a lift ticket, you can also play golf,” said Kate Major at Treetops Resort near Gaylord.

The first snow of the season fell in late November, but only a small accumulation came from the brief spell of cold weather.

“The last measurable snow in Gaylord was on Dec. 2, and that was only 0.2 inch. So far this season, Gaylord has only had five inches of snow,” Boris said.

Ski areas jumped at the chance to make artificial snow when the cold came, with some resorts opening for skiing Thanksgiving weekend.

“We’re seeing a long-range forecast for temperatures to drop” this week, said Erin Ernst, public relations manager for the Boyne resorts. “We’re hoping that forecast will hold so we can again make snow. We need 28 degrees or colder. A lot can happen in two weeks.”

Don’t count on it, according to Boris. “The chances of a white Christmas are relatively small,” he said. “That doesn’t mean we won’t see winter; it will happen eventually. What we really need is a roadway of cold air to open over the Midwest. But there’s no sign of that in the near future.”

Predictions from the weather service and Accuweather.com show the forecast isn’t promising for the next few weeks. Cold air might not arrive until the end of the month and the chances of a white Christmas are slim. Accuweather predicts only slightly cooler weather through the first week in January.

Some blame the change from the last two snowy and cold winters on El Nino, which is occurring this fall. Irregularly occurring climatic changes are affecting the equatorial Pacific region, creating unusually warm water and causing unusual weather patterns over North America.

What began as a mild promise of early winter quickly changed as temperatures rose.

“We opened for skiing last weekend (Dec. 5-6) but the weather has warmed, so we won’t reopen until colder weather arrives,” said Brian Lawson, a spokesman for Benzie County’s Crystal Mountain Resort.

“Over the last seven years, we usually open around mid-December. This warm spell hasn’t had any real effect on our revenue, and we will have full occupancy over the holiday week. We need colder weather.”

If that doesn’t happen right away, most resorts have other activities for their guests, such as water parks, wine tours, fat tire bike courses, shopping, spas and zip lines.

Businesses in the Cadillac area are feeling the effects of the warmer weather. Pilgrim’s Village Bait and Tackle on Lake Cadillac has been hit hard.

“We are hurting,” store manager Debbie Yonkman said. “Some guys are taking their boats out on the lake, but ice fishing is big around here, and lodging and bait sales are off due to the lake free of ice. I have no figures, but business is down. We need ice.”

Farther east, Lyman’s On The Lake Resort in Houghton Lake has seen a slow start. There is no ice on the big lake, which draws walleye fishermen from all over the Midwest.

“I haven’t looked at the numbers.” owner Kurt Beachnau said. “There’s nothing you can do about the weather, but I think it’s possible to catch up to the numbers — January and February are our big months, there’s a pent-up demand for fishing for walleye.” 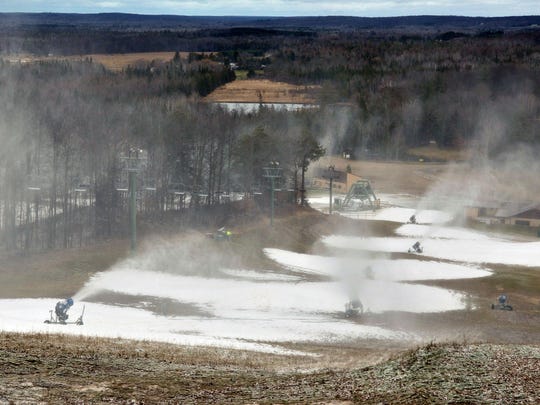 Treetops Resort near Gaylord put snow machines to work the day after Thanksgiving, trying to provide snow for early season skiing. The lack of snow in Michigan has hurt sales of snowmobiles, skis and other winter sports equipment, kept ski slopes closed and delayed the formation of ice for skating and fishing. But Treetops has tried to make the best of the unseasonably warm weather. “If you have a lift ticket, you can also play golf,” said Treetops’ Kate Major. (Photo: John L. Russell / Special to the Detroit News)

The largest hit might very well be the snowmobile business and its impact on northern Michigan. Indian River Sports Center has seen a dramatic downturn in fall business, according to owner Travis Conners.

“Sales are probably down 20 units, about $250,000 this year, but when we get snow — and we will — we’ll get that loss back very quickly. It’s tough to sell a machine in 60-degree weather. We might be down 20 percent today but we could be up 40 percent tomorrow if the weather changed.

“We rely heavily on the Detroit market to send people north. Last year, we had cold weather and snow and were riding on the coattails of a great year prior to that. This year we are riding on last year’s great sales, but it’s nothing earth-shattering. We’ll get snow. It’s just a matter of time.”

Mike Norton of Traverse Tourism reports very little downturn in motel revenue or retail business. “With lower gas prices and good driving conditions, the economy has not taken much of a hit,” Norton said. “Retail is doing really well.”

Pete Fitzsimons, executive director of the Petoskey Area Visitor’s Bureau, said business in Emmet County was up 20 percent in October.

“Those gains will be offset if we don’t get snow. Mother Nature is our ultimate terrorist, we are at her whim,” he said.

Some good news, some bad

Bill O’Brien of the Traverse City Area Chamber of Commerce said the number of day trippers was up this fall, and it’s a mixed bag of visitors.

“When we don’t get the winter sports guests, others are traveling because of the good roads. With bad weather, nobody comes out,” he said.

Even farther north, the mild weather has forced Northern Michigan University to do something it’s done only three times since 1986: Cancel its NMU Wildcat Open, which had been scheduled for Saturday and Sunday.

Head ski coach Sten Fjeldheim told the Associated Press it’s a “huge contrast” to last year, when the Marquette area at the top of the Upper Peninsula had “outstanding snow” starting in November.

He said there is usually enough snow to hold the competition, but this year there’s “no snow to even shovel on the trail.”

One entity enjoying some savings is the Grand Traverse County Road Commission.

“Over the past two years, we have been hit hard with cold and snow,” road manager Jim Cook said. “Last year, we had 30 inches of snow in November, which ate our budget with gas, overtime, salt and sand use and equipment maintenance.

John L. Russell is a photojournalist and freelance writer from Traverse City.