At closing, 400 jobs will be lost around U.P. town this summer

Peter Frustaglio Jr., a diesel mechanic at Cleveland Cliffs' Empire Mine, maintained and painted this mine truck before it was donated to a mining museum in Ishpeming. Frustaglio speaks proudly of his family's involvement in mining that goes back four generations. Now, Cleveland Cliffs has announced it plans to close the mine by the end of the summer. Dale G. Young, The Detroit News
Fullscreen

The city of Ishpeming is nestled in a small valley in the Marquette Iron Range, just 15 miles west of Marquette. Old mine shaft buildings still jut above the skyline from the days when iron was worked in underground mines. Dale G. Young, The Detroit News
Fullscreen

The James Oberstar loads up with iron ore pellets at the ore docks in Marquette harbor before sailing for a midwest steel mill on Tuesday, April 19, 2016. Rocks along the shoreline show the same red-orange tint as the ore. Dale G. Young, The Detroit News
Fullscreen

Ishpeming City Manager Mark Slown hopes to get businesses to use the vacant storefronts on Main Street in his town even after the news hit that Cleveland Cliffs Corp will close the Empire mine by the end of the Summer. Dale G. Young, The Detroit News
Fullscreen

Early morning traffic makes it's way through downtown Ishpeming in April. Ishpeming has a population of about 6,500, and according to census data, its cost of living is about 18.5% lower than the national average. Dale G. Young, The Detroit News
Fullscreen

Entrepreneur Robin Baird and her sister have undertaken a huge project in the old Mather Inn in downtown Ishpeming, converting the elegant hotel into apartments and banquet halls. Dale G. Young, The Detroit News
Fullscreen

Mountains of waste rock from the Empire and Tilden mines pile up on the skyline, and are visible from Ishpeming and nearby Negaunee. Dale G. Young, The Detroit News
Fullscreen

Red-orange streaks of iron-bearing ore streak this sedimentary rock. The red ore is usually hematite, while magnetite is usually grey or black. Both are found in the Marquette range. Dale G. Young, The Detroit News
Fullscreen

An ore train moves iron ore pellets from the mines near Ishpeming, to ore loading docks at nearby Marquette on lake Superior. Once there, they are put on ships that sail to Midwest steel mills. Dale G. Young, The Detroit News
Fullscreen

A pedestrian makes his way across Main Street in downtown Ishpeming which already has too many empty storefronts to suit City Manager Mark Slown. Dale G. Young, The Detroit News
Fullscreen

Old mine shaft buildings still jut above the skyline in Ishpeming from the days when iron was worked in underground mines. This structure housed the hoist, that lifted men and materials in and out of the mine. Dale G. Young, The Detroit News
Fullscreen

A youngster on a tricycle gets some help from an older citizen on one of the steep sidewalks in Ishpeming and right past a "for sale" sign. Dale G. Young, The Detroit News
Fullscreen

Michigan State University students and staff walk past a large chunk of iron ore placed outside the school's Natural Sciences Building. The ore was donated to the school by the city of Ishpeming to honor the many mining engineers and geologists trained at the school. Dale G. Young, The Detroit News
Fullscreen

The large chunk of iron ore donated by Ishpeming weighs 29 tons and has visible streaks of ore in the stone. Dale G. Young, The Detroit News
Fullscreen

Robin Baird, left, and master gardener Cheryl Lampman clean up around the Mather Inn in Ishpeming. Baird and her sister, Teresa, are restoring the inn.(Photo: Photos by Dale G. Young / The Detroit News)Buy Photo

Palmer — Mass is ending at Our Lady of Perpetual Help. This is a mining church in a small mining town within sight of a massive iron ore mine.

The 33 worshipers have much to pray for in the 418-person village. The Upper Peninsula’s Empire Mine is closing, symbolic of a fading heritage industry as old as the state. Four hundred of the best-paying jobs in this rugged region will be gone by summer’s end.

Families have spilled blood there. Lyle Larson’s brother, John, was killed at 18 while constructing the mine in 1962.

In the church vestibule, gathered among three other lifetime miners, Brad Holman ponders a question: What now?

“Maybe I should get out of the way and give the younger ones a chance,” said Holman, almost 60, who has worked for 33 years at the mine.

Seniority may allow him to bump into a nearby sister iron mine — the last in Michigan.

“But when I retire, I want to be able to retire for good,” he said.

Lower production, tumbling iron ore prices and falling revenues and stock shares have plagued the owner of the massive mine, a mile wide and 1,200 feet deep. The industry is also grappling with increased imports from China. 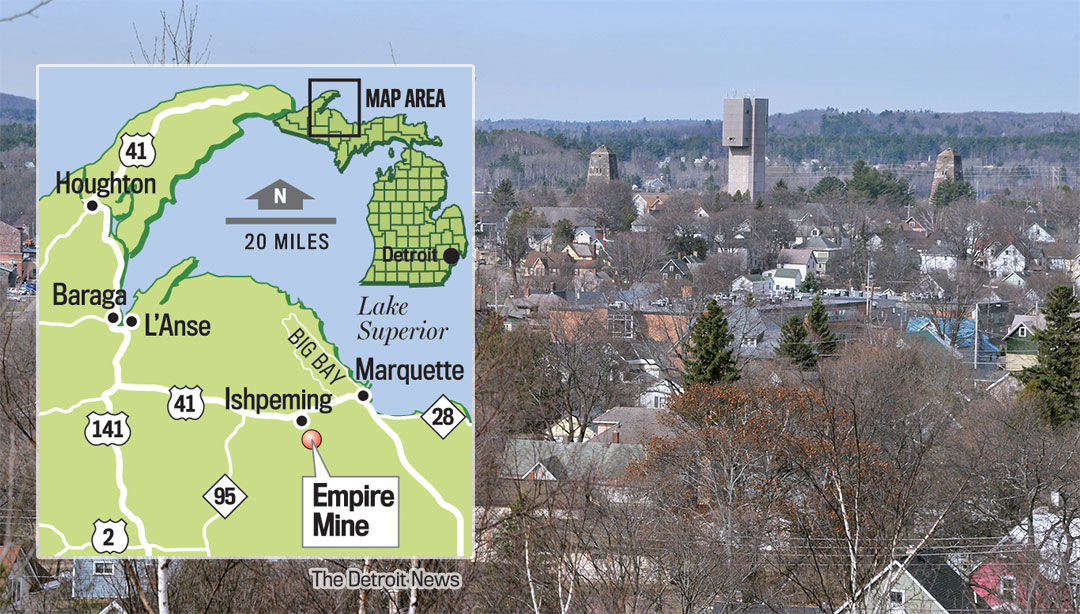 “It’s the end of the life,” said Patricia Persico, spokeswoman for the mine owner, Cleveland-based Cliffs Natural Resources. “There is no ore that is viable to mine anymore.”

The same is not true of the company’s adjacent Tilden Mine. Lourenco Gonclaves, chief executive of Cliffs, told community leaders earlier this year the younger mine could have several decades left.

The Tilden Mine employs 770 workers. It will be the last operating iron ore mine in the state.

Both open-pit mines are south of Ishpeming in Marquette County, about five miles apart.

This is postcard country.

“Ishpeming” means “High Place” or “Heaven” in Ojibwa. There are a dozen waterfalls, four-season trails and other recreation. Wolves, cougars and moose stalk the woods.

Defunct mining towers cast a shadow over Ishpeming’s 6,400 residents. The Cliffs Shaft Mine, now a Michigan State Historic Site, was once one of the most productive of the area’s underground iron ore mines. The defunct mine now includes a museum and historical attraction.

Dating to the late 1800s, and closed in 1969, for some it is a reminder of the region’s rich roots. For others, it represents heritage lost.

There is uncertainty here.

“There is no doubt there will be significant impacts. What the number (of jobs) would be, I don’t know,” City Manager Mark Slown said.

“Some may retire. Others may leave the community and take employment elsewhere. Others may stay and take other jobs, or start their own business. We’re trying locally to make sure whatever impact there is, is as minimum as possible.”

Proud of its heritage, the city last year gifted a 29-ton sample of iron ore to Michigan State University. The gift now rests outside the north entrance of the Natural Science Building, which houses the Department of Geological Sciences. It is streaked red with jasper.

There also have been red flags. The mine was temporarily shut down last summer due to an economic slowdown in the industry. Rumors were dismissed; no one is dismissing them anymore.

Peter Frustaglio Jr. is a fourth-generation diesel mechanic. His family has worked the mines since the mid-1900s. Wages are $20 to $30 an hour, without overtime, he says. That is about twice Ishpeming’s per capita income of $25,000, according to the U.S. census.

Frustaglio is resigned to the fate of the Empire Mine.

It seems almost everyone knows someone touched by the mine closing, personally or through friends or family.

It is 3:30 p.m. at the Kewadin Casino in Christmas, some 50 miles east of the mining. It is a slow Saturday; 29 gamblers are feeding the slots. Payout bells sound anemic amid the slate and knotty pine interior.

“A lot of people don’t save any money anymore,” Dow said. “They’ll have nothing.”

Workers are represented by the United Steel Workers, locals 4974 and 4950.

Kate Lafave’s husband, John, is working second shift as she ponders the family of four’s future. She is relaxed and smiling, confident John’s 10 years are enough seniority to avoid being bumped by another worker.

The nearly century-old, 47-room hotel in Ishpeming was once a glamorous place for mining executives, important guests, politicians and dignitaries. The cast of the classic 1959 movie “Anatomy of a Murder” stayed there, and it is where Duke Ellington composed the movie’s score.

It was listed on the National Register of Historic Places in 1978 before closing in disrepair in 1987.

The inn will now include luxury apartments, three guest suites, banquet rooms and the separately run Cognition Brewing Co. microbrew. Some apartments are already occupied, with commitments for others. It is expected to fully open this summer.