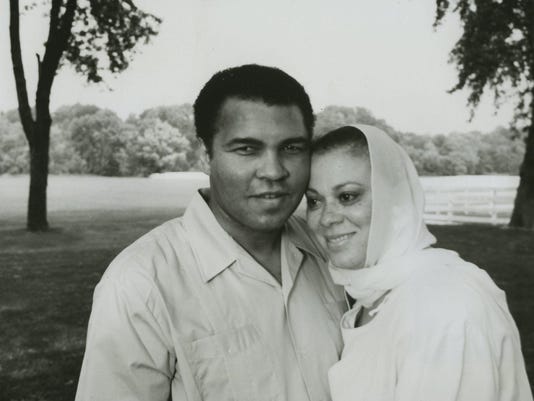 Late in his life, the legendary Muhammad Ali lived on a 85-acre estate along the St. Joseph River in tiny Berrien Springs, Michigan.

And the man who declared he was “the greatest of all time” turned out to be a fantastic neighbor who gave generously to the community and opened up his home to neighbors.

“So many people had a story of the kindness of Muhammad Ali and Lonnie,” his wife, wrote Anna Clark, a Detroit-based journalist, on social media. Clark wrote that she grew up in Berrien Springs.

Ali bought the property in 1975 just outside the town located on the southwestern tip of Michigan and lived there until 2006. None of the newspaper articles written at the time of his move explain why he decided to ever buy the property once owned by a bodyguard of Chicago gangster Al Capone.

He moved to Arizona because of his battle with Parkinson’s disease, according to a Jan. 21, 2007 article from the South Bend Tribune.

Ali lived in Michigan with his wife Lonnie and their son Asaad. They were very charitable, according to newspaper accounts at the time of his 2006 move and one former resident of the town of 1,800. Ali was an international celebrity by the time he moved to Berrien Springs, and newspaper accounts noted he traveled so much, he may have averaged about 90-days-a-year in the town.

But he and his family were committed to the area.

Clark wrote: “They supported the parks and sports facilities of rural schools. They secretly donated shoes, prom tickets, calculators and athletic warm-up clothes to small-town kids. There are hundreds of kids that the Ali’s have helped and they had no idea who it was from."

The Ali’s charity was also noted in the South Bend Tribune article.

Their son, Asaad, attended Niles public schools. When the former boxer moved to Arizona, he was 65 and was already afflicted with Parkinson's disease, the chronic, progressive disorder of the nervous system that disrupts muscle coordination.

Ali, 74, died Friday in the Phoenix area after being hospitalized earlier this week with respiratory problems.