Over the decades, the museum has built a collection of artifacts procured from nearby lighthouses

ADVANCE FOR SUNDAY, JULY 24 AND THEREAFTER- In this July 7, 2016 photo, the Marquette Harbor Lighthouse is seen in Marquette, Mich. The structure, located on Lakeshore Boulevard, is the subject of a celebration on July 30 that will mark its 150th anniversary. The Marquette Maritime Museum has chronicled and celebrated life on the Great Lakes for well over a century. (Lisa Bowers/The Mining Journal via AP)(/The Mining Journal via AP) MANDATORY CREDIT(Photo: Lisa Bowers / AP)

Ishpeming— While waterways such as the Great Lakes are viewed by modern society as a source of recreation and transportation, it is easy to forget that local history was forged, in large part, by the water that surrounds us.

The Marquette Maritime Museum has chronicled and celebrated life on the Great Lakes for well over a century. The crown jewel of its collection is, without a doubt, the 150-year-old Marquette Harbor Lighthouse.

Museum board member Carolyn Northey said the museum moved into what was the city of Marquette’s Water Works building in 1982. Over the decades, the museum has built a collection of artifacts, including a unique assembly of lighthouse lenses, all procured from lighthouses within a 100-mile radius of the museum.

“I challenge anyone to find a better collection of lenses anywhere on the Great Lakes. Having a 2nd, 3rd, 31/2 and 4th order ‘classical’ Fresnel lenses in the same exhibit hall concurrently is unheard of,” Northey said.

The museum also boasts an enclosed flotation device called a life cart that could transport four to five people stacked on top of one another from a shipwreck until they could get to a rescue ship.

Over the decades, Marquette Maritime built a collection of artifacts from nearby lighthouses. (Photo: Lisa Bowers / AP)

Other exhibits include the Edmund Fitzgerald shipwreck, the Henry B. Smith shipwreck and displays about the Stannard Rock Lighthouse, the Big Bay Point Lighthouse and the McClintock Annex, commemorating the World War II battle of Leyte Gulf involving two submarines, the USS Darter and the USS Dace.

The battle, considered the largest in naval history, marked a pivotal point in the defeat of the Japanese.

Museum visitors can peer through an authentic 40-foot-tall WWII submarine periscope, named for the Marquette native Navy Capt. David McClintock who commanded the Darter during the battle.

Children who come to the museum can take part in a treasure trove of activities including the opportunity to dress up as a pirate, or take part in a scavenger hunt just to name two. 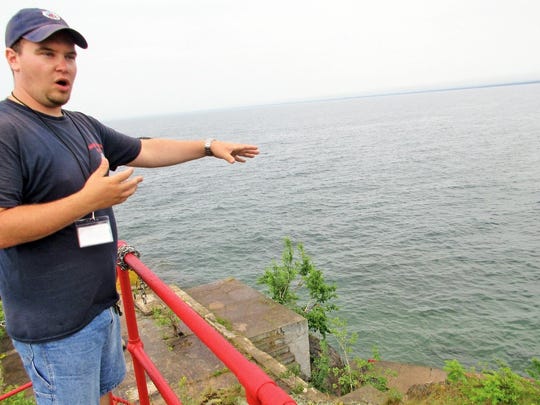 ADVANCE FOR SUNDAY, JULY 24 AND THEREAFTER - In this July 7, 2016 photo, Marquette Maritime Museum seasonal manager Ryan Dubay talks about the remnants of a building at the end of the Harbor Lighthouse catwalk in Marquette, Mich. The museum has chronicled and celebrated life on the Great Lakes for well over a century. (Lisa Bowers/The Mining Journal via AP) (Photo: Lisa Bowers / AP)