Baseball’s back in Muskegon Heights as summer diversion 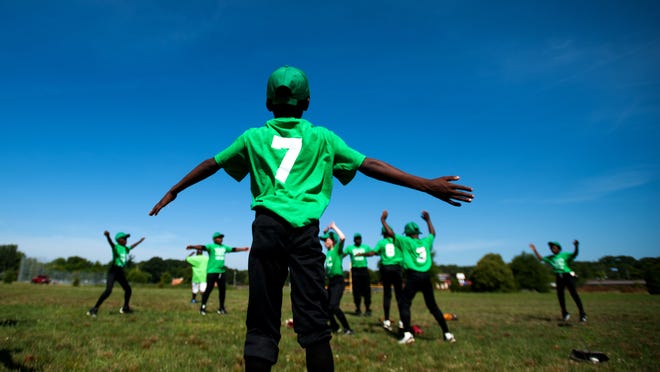 Batters swung at pitches over their head. The ball rolled between the legs of one player and then another. The right fielder was bonked in the back of the head by a fly ball.

It was a long way from Comerica Park, but this Saturday wasn’t about snazzy hitting and fielding.

It was a homecoming.

After 15 years, youth baseball has returned to Muskegon Heights, one of the poorest, most dangerous towns in Michigan.

The pint-sized players tried on the American pastime and, while the fit was a little raggedy, their lapses were easily forgiven.

Some had never played before. Heck, the 93 boys and girls, ages 8 to 11, weren’t even alive the last time organized baseball was here.

The four teams will play two games a week over the next month in the Muskegon Heights Police Athletic League. The season will be longer next year.

The police, who organized the league, wanted to give youngsters something to do during the summer, said Chief Joe Thomas Jr.

In a town where most families have been touched by violence, baseball gets children off the street and doing something wholesome, he said.

The league provides a respite from the nastiness, he said. For a few hours a week, kids can be kids.

And that’s what was happening Saturday.

“Level swing, baby girl,” a coach encouraged a player as she waited to hit.

While youth baseball is a staple in most towns, Muskegon Heights isn’t most towns.

The western Michigan community seems to start every day with two strikes against it. Nearly half of its students live in poverty and its violent crime rate is the third highest in Michigan, after Detroit and Flint, according to U.S. Census figures and Michigan State Police crime statistics.

Near the ballfield, a homeowner painted his wooden fence yellow with black lettering so it looked like police tape.

Five other residents were killed during those four months in a town of 10,900 people, police said.

Most of the violence can be traced to gangs, whose symbols are scrawled on abandoned homes.

“We need to find more things for kids to do,” said Purnell’s wife, Kim, who was at the game Saturday. “We need to get them away from the negative and show there’s more to life. This is a start.”

From idea to reality

Baseball isn’t going to erase all of the town’s ills.

But slowing the procession of children to street corners is a start.

In March, police were kicking around ideas on how to break the cycle of gangs to drugs to death, said Thomas.

“It’s a good way for the kids to learn to stay in shape,” she said.

Thomas, an All-American football player at Alcorn State who was police chief of Southfield for 20 years, loved the idea.

If he came up with the money, he asked Kitchen, would she start the league?

Kitchen, whose life was about to get very busy, said yes.

In two weeks, Thomas secured a $9,500 grant from the Community Foundation for Muskegon County.

The fast pace continued as Kitchen scrambled to set up the league with summer quickly approaching.

Kitchen looked high and low for players and volunteers to coach them. She raided schools and leagues of other sports, showing up at basketball tournaments.

Little by little, a baseball league was growing in Muskegon Heights.

“We built the plane while it was in the air,” said Briggs, a city building inspector who helped Kitchen.

Starting with the basics

Once the players were found, it was time to teach them.

During the first practice last month, manager James Cooper Jr. left the gloves in a big pile, thinking his young charges would know what to do with them.

But they didn’t know which hand to put the mitts on.

The gloves were useless anyway, said Cooper. Not a single ball was caught during the entire practice.

The final step was resurrecting the old baseball field at Mona Lake Park.

The lakeside park is the jewel of the city. The city spruced up a pavilion, basketball courts and playground equipment several years ago, but ran out of money before it could fix the diamond.

After 15 years, it barely resembled a ballfield anymore. The infield had returned to grass. A tree had grown into the backstop at the lakefront park. Electrical wiring had been torn out of the concession stand by vandals.

Workers tore out the infield grass and replaced it with decomposed granite, smoothed out the outfield, painted the cement-block dugouts and concession stand green, and surrounded the whole thing with a fence donated by a local business.

The ragtag sandlot, like the tykes playing on it, remains a work in progress.

After several false starts, one because the field wasn’t ready and the other because the new uniforms were too big, Opening Day finally arrived last weekend.

Mayor Kim Sims cut the ribbon. Thomas threw out the first pitch. The National Anthem was going to be sung as soon as the singer could be found.

Leslie Slater, who was getting a drink of water on this sweltering day, was found and sang the song over a portable loudspeaker.

Sims said sports helps kids by providing an option other than joining a gang.

“We need to address the crime factor before it gets out of hand,” she said.

It quickly became apparent that this wasn’t the typical start of a youth sports league.

Behind the backstop was a 60-foot banner that read “Stop the Violence.” It showed a circle with a line through it over a gun, and the photos of 37 Muskegon County residents who have been killed.

Resident Fred Williams, who put up the banner, said he’s adding two sections so he could include victims from the last several years.

He became involved with a local, anti-violence group in 2013 after a young man died in his arms. He didn’t know the man, who was shot in front of Williams’ home.

“Sports keeps them busy, off the street,” he said. “Sports is a beautiful thing.”

During the games, parents and grandparents sat on blankets, lawn chairs and the aluminum stands, all in the shade of a sprawling oak.

They snapped photos of the kids in their brightly colored jerseys with a P.A.L. patch on the shoulder.

One team’s green jerseys may have had the longest name in sports history: The Community Station/ WUVS 103.7 FM/ WWW.1037TheBeat.com/ The Beat.

Lovie Gray, cheering on her 10-year-old son, lamented how violent the town had become since her childhood. Baseball’s return wasn’t a moment too soon, she said.

“It’s been a long time coming,” she said.

The kids may be beginners but the competitive juices were flowing, at least among the parents.

They shouted encouragement. They beamed when their child did something good. They bellowed at the umpire.

They all spoke the same language, the universal one called baseball cliché.

“Make him throw strikes.” “Go down swinging.” “Get some wood on it.”

The players just wanted to get up, smack the ball and run the bases.

Surrounded by crime and poverty, they frolicked amid an island of playfulness where the crack of a bat replaced the clap of gunfire.

Also OK was the game’s first batter, who hit the ball so far he circled all of the bases before it could be retrieved.

That’s right, the first hit in the rejuvenated Muskegon Heights baseball league was a home run.