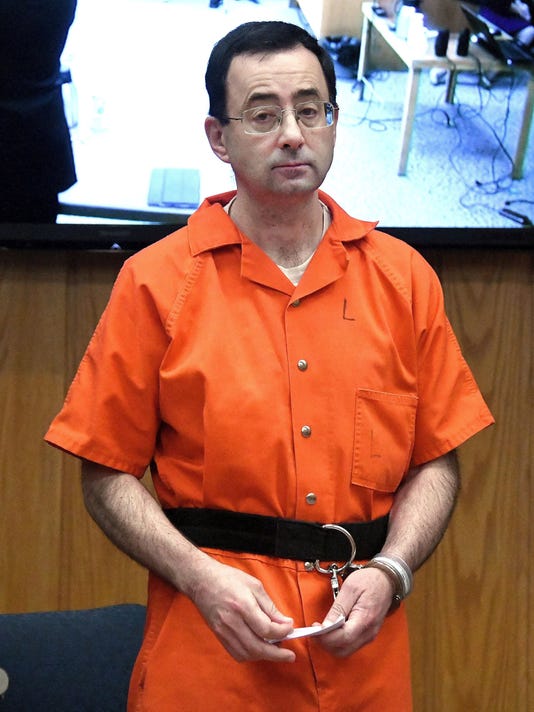 Larry Nassar appears at his sentencing in the court of Judge Janice Cunningham and receives a sentence of 40-125 years in prison on Feb. 5, 2018 in Charlotte, Michigan.(Photo: Dale G Young, Dale G. Young, Detroit News)

Boston – The legal portion of the Larry Nassar scandal at USA Gymnastics may soon be over.

USA Gymnastics President Kerry Perry said representatives for both the organization and athletes who were abused by Nassar – a former national team doctor who abused hundreds of women under the guise of medical treatment – met last week. Perry called the mediation talks “not only productive but continuing to move us down the path of resolution.”

Perry made the remarks on Sunday in her first extended question-and-answer session with reporters since taking over last December. Her public silence during the first 260 days of her tenure has drawn the ire of Nassar victims, including reigning Olympic champion Simone Biles, who last week it was time for Perry to speak up. Perry said she respected Biles’ opinion and called the kind of changes the organization is making in the wake of the scandal “scary.”

Perry says she spent her first eight months on the job trying to get a handle on the landscape within USA Gymnastics and allowed it’s difficult to communicate with survivors on an individual level due to the ongoing legal situation. Perry added the goal in the end is to have “our survivors standing side by side with our organization.”

Perry said USA Gymnastics has implemented 86 percent of the more than 70 recommended changes suggested by an independent review spearheaded by former federal prosecutor Deborah Daniels. The changes include making the method to reporting abuse easier and creating an electronic system that allows the reports to be tracked.

Though several high-profile sponsorship deals have lapsed as part of the Nassar fallout, Perry says she is “very confident” USA Gymnastics will continue to “grow” and said potential partners are “looking forward to the changes we’re making.”

USA Gymnastics is also in the process of finding a new training facility after the organization pulled out of its agreement to buy the Karolyi Ranch north of Houston, a decision it only made after the urging of Biles, who pointed out it was one of the places where Nassar abused victims. Perry said the new center will be a “symbolic fixture that represents a lot of our mission and culture.”

There’s no timetable on when any final decision will be made, fitting for an organization that finds itself caught between addressing the past and trying to move into the future.

The leadership talks about becoming more transparent, but until the legal process wraps up, Perry will continue to be limited by what she can and cannot say. She did her best to stick to her talking points during the 22-minute session and failed to directly answer several questions, including why USA Gymnastics did not include Nassar survivors during any portion of the US Championships this weekend at the new Boston Garden.

While Perry insists on staying behind the scenes, others associated with the organization want her to take a more prominent role going forward.

“Going into it, our expectation was (she was) going to be the face of USA Gymnastics and be a positive change and a positive force,” said 2005 world champion Chellsie Memmel, who was on the committee who selected Perry to take over for Steve Penny, who resigned under pressure in March, 2017. “So to me, that’s been a little bit disappointing and I’d like to see more. Just keep going and see what happens.”