Judge Theresa Brennan is accused of deleting information from her iPhone after her husband filed for divorce in December 2016 and then lying about it. 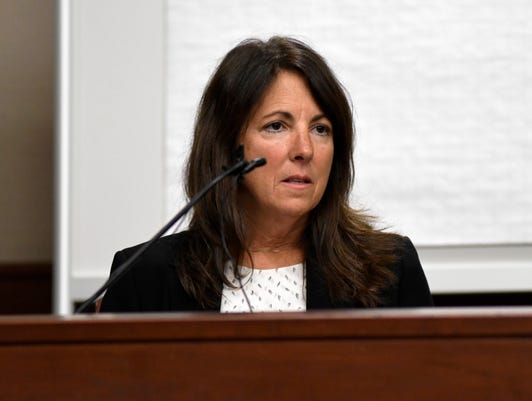 A Livingston County judge who's facing state ethics proceedings was charged Thursday with perjury and tampering with evidence by the state Attorney General's Office.

Judge Theresa Brennan of Livingston County's 53rd District Court is accused of deleting information from her iPhone after her husband filed for divorce in December 2016, and then lying about it during depositions in the case in January and February of 2017.

Michigan State Police seized the phone during an investigation of misconduct and perjury in April 2017, according to an affidavit by MSP Sgt. Brian Reece, who conducted the investigation. The phone was taken to the Computer Crimes Unit in Livonia, where an investigator found the device had been "reset to factory settings," meaning data had been erased, Reece wrote.

"...There is probable cause to believe that Theresa Brennan committed perjury during her divorce deposition, destroyed or tampered with evidence in a pending or future case before the Livingston County Circuit Court, and used her judicial office to enable her to destroy evidence without the court signing (an) ex parte protection order or reassigning the case to another judge," the affidavit read.

Brennan's lawyer, Dennis Kolenda, did not immediately respond to a request for comment Thursday.

An arrest warrant was authorized for three felony counts: perjury, tampering with evidence and misconduct in office/common law offenses, according to the complaint.

Brennan, a judge since 2005, testified last fall during a hearing before the Michigan Judicial Tenure Commission to address allegations of failing to disclose a relationship with a state police officer during a murder trial. She’s also accused of using staff to perform personal tasks for her on county time.

Lynn Helland, executive director and general counsel of the commission, said the fact-finder who led the proceedings will issue a report on his findings.

That report will go to the entire commission and each side of the case will make arguments before the panel possibly sends it to the Michigan Supreme Court, which could ultimately decide Brennan’s future on the bench.

One of the lawmakers had noted that though the tenure commission’s complaints against Brennan were pending and her caseload was removed in June, she continued to receive a salary.