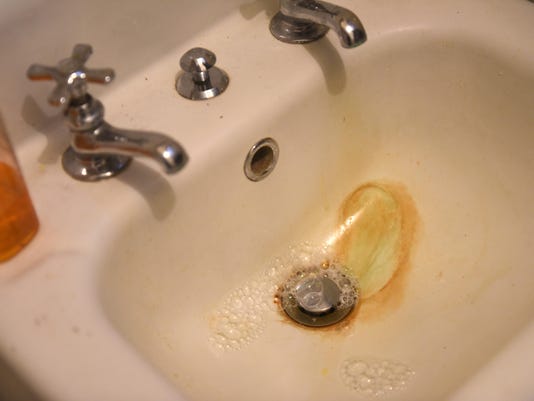 Brown stains are seen on sink at St Mark Missionary Baptist Church in Flint. State health officials Wednesday repeated a recommendation that Flint parents can bathe children in the city’s water, despite an increase in rashes reported in the past couple of weeks.(Photo: Max Ortiz / The Detroit News)Buy Photo

State health officials Wednesday repeated a recommendation that Flint parents can bathe children in the city’s water, despite an increase in rashes reported in the past couple of weeks.

An advisory from the Michigan Department of Health and Human Services said there is “no scientific link” between Flint water and skin rashes that began appearing after the city switched from the Detroit system’s Lake Huron water to Flint River water in April 2014.

The city switched back to the Detroit water system in mid-October, but residents still can’t drink the water due to lead seepage from water pipes damaged by highly corrosive Flint River water.

Michigan Chief Medical Executive Dr. Eden Wells said there has been an increase in rashes reported to the city’s Safe Drinking Water Hotline, totaling just under a dozen during the the past week and a half. Hurley Medical Center pediatrician Dr. Mona Hanna-Attisha told The News she too has observed an increase in skin rash cases.

A research initiative will be announced in the next few days to explore what’s behind the rashes, Wells said.

“There’s going to be a system in place to further evaluate the rashes,” said Wells, who is also a clinical associate professor of epidemiology at the University of Michigan. “Let’s get more information about these rashes so we can get the data.

“We take every concern about a rash very seriously, and we’re working with our federal partners and all the doctors in the community to get more information not only about rashes but about (other health concerns.)”

Hanna-Attisha, the pediatrician whose research uncovered a spike in lead poisoning among Flint children, said a connection with the water can’t be ruled out.

“We are seeing a resurgence of skin issues right now,” Hanna-Attisha said. “Is there something else going on (with the water)?

Currently, rashes must be reported to the state health department only when an infectious disease is suspected, such as chickenpox or measles. The Michigan Department of Health and Human Services is working with the Centers for Disease Control and Prevention as well as the Environmental Protection Agency to determine what additional supports and surveillance may be necessary to track the rashes.

Hanna-Attisha noted that parents should bathe their children in lukewarm water, since more lead is present in hot water than in cold. State health officials should heed parents concerns, she added.

“We have little kids coming to school that haven’t had a good bath since October,” she said. “We have to listen to our families and believe them.”