The amendment would provide up to $400 million in federal emergency funding, which would have to be matched by the state 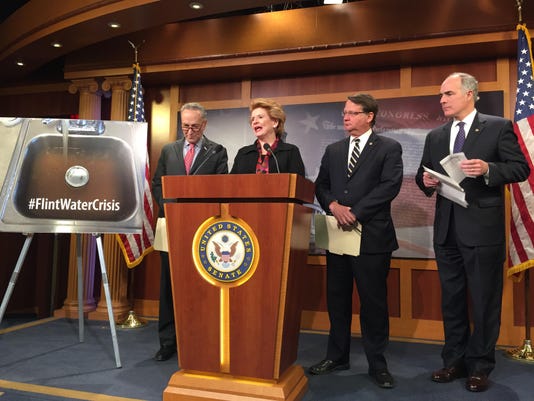 U.S. Sen. Debbie Stabenow, D-Lansing, talks about a proposal to provide up to $400 million in aid for replacing lead service lines in Flint. The State of Michigan would have to match the appropriation.(Photo: Melissa Nann Burke / The Detroit News)Buy Photo

Washington — Democratic U.S. Sens. Gary Peters and Debbie Stabenow plan to offer an amendment to a bipartisan energy policy bill with the goal of jump-starting the process of repairing or replacing lead services lines contributing to the contamination of drinking water in Flint.

The amendment would provide up to $400 million in federal emergency funding to the Environmental Protection Agency to help fix Flint’s water-supply infrastructure, hire new personnel and cover the cost of technical assistance provided by the EPA or its contractors. But the plan may face an uphill battle in the Republican-controlled Senate, where GOP members are pressured by conservative constituents to rein in the growing national debt.

The emergency money, provided through the Drinking Water Revolving Loan Fund program, would have to be matched dollar-for-dollar by the State of Michigan — whether it’s $50 million or $400 million, the lawmakers said.

“This is as much a national crisis as a hurricane or tornado or flood or anything else in terms of what has happened to people in Flint, Michigan,” said Stabenow of Lansing. “We believe it’s appropriate for the federal government to match the state’s actions but not to replace the state’s actions.”

The proposal would also establish and fund a $200 million Center of Excellence on Lead Exposure to research the immediate and long-term needs of children and adults exposed to lead and communicate with the community, Stabenow said.

“We will need his help as a Republican governor, though, to help us with our Republican colleagues here in the Senate to get this money,” Peters said.

Stabenow agreed that Democrats will need Snyder to lobby to help “get this done.” Stabenow said she has reached out to Sen. Lisa Murkowski, R-Alaska, who chairs the Energy Committee and is managing the bill.

"Chairman Murkowski is committed to working with her Senate colleagues to help the people of Flint, Michigan," said Michael Tadeo, spokesman for the Senate Energy and Natural Resources Committee.

Stabenow said she and Peters will work "very, very hard to reach across the aisle to get bipartisan support.”

A spokeswoman for Senate Majority Leader Mitch McConnell said members and the committees will review the proposal.

Senate Majority Whip John Cornyn, R-Texas, has concerns about the proposal. “While we all have sympathy for what’s happened in Flint,” responsibility primarily lies with state and local governments in Michigan,” he said.

“Given that we have $19 trillion in debt, I think it’s fair to ask, do we want to have the federal government replacing all the infrastructure put in place by cities and states all across the country?” Cornyn said at the U.S. Capitol on Thursday.

Cornyn wondered about the resignation of the Environmental Protection Agency’s Midwest administrator in connection with how the agency handled the Flint water contamination. “That is in the ambit of the federal government, and we need to be doing oversight and making sure the EPA has been doing its job,” he said.

Republicans also don’t want to appear insensitive to the man-made catastrophe in Flint — a largely black and impoverished community of roughly 100,000. Democrats have suggested race and class played a role when state and local officials in Michigan, for months, dismissed residents’ complaints about water quality and medical symptoms consistent with lead exposure.

“There is no doubt in my mind that if one of the governor’s supporters in a wealthy part of Michigan called up and said, ‘My water looks like this,’ ” Stabenow said, pointing to a poster-sized photo of rust-colored water, “I don’t think it would be very long at all before it was fixed.”

Cornyn said, so far, the Flint crisis has been largely nonpartisan in the Senate, but “I have no doubt there will be some people who try to exploit this for political purposes.”

“I’m sure (the federal government) will be there in some form or fashion to help, but whether we just ought to have a blank check — that’s something we need to discuss.”

Asked about the possibility that Republicans will reject the measure because it had no committee hearings, Peters said there’s no time for hearings. “

Lead has leached from Flint’s water lines and pipes since April 2014 when the city was pumping its drinking water from the corrosive Flint River. After Flint doctors found children exposed to lead poisoning in September, the city last fall switched its water source back to Detroit’s treated Lake Huron water.

The Stabenow-Peters amendment to the Energy Policy and Modernization Act would also incorporate legislation announced Wednesday by Peters, Stabenow and Rep. Dan Kildee, D-Flint Township, that would require the EPA to alert the public of high lead levels in drinking water when a state agency fails to do so for more than 15 days.

“Let’s be clear. The primary responsibility for notifying residents lies with the state,” said Peters of Bloomfield Township. “But when you have a situation like we had here in Flint, where the state was basically hiding information, there has to be another layer of accountability.”

The amendment would also give Michigan flexibility to use funding available through the federally funded Drinking Water Revolving Loan program to help forgive nearly $21 million in past water infrastructure loans owed by Flint to the state. Murkowski has specifically expressed support for this provision of the amendment, Stabenow said.

“If that money was not due back to the state, those dollars could be redirected for immediate improvements to Flint’s infrastructure,” Kildee told reporters.