Gov. Rick Snyder said he hopes Flint residents will be able to drink safe water from their taps in two to three months 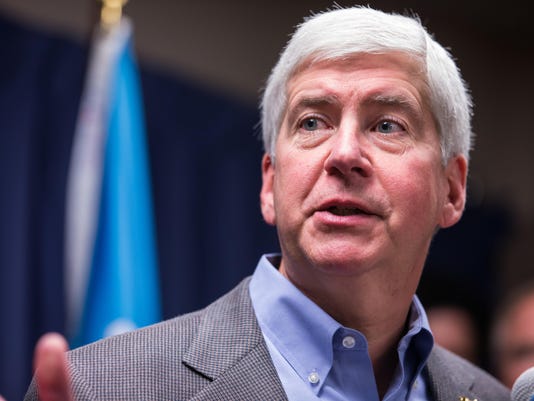 Gov. Rick Snyder signed Friday a $28 million supplemental spending bill to benefit Flint and said he hopes residents will be able to use safe drinking water from their taps within two to three months.

But the decision on safe drinking water will depend on testing, including validation from outside experts, and not any set timeline, the Republican governor said in Grand Rapids, where he signed the Flint funding bill during an annual gathering of the Michigan Press Association.

“We’d all hope sooner rather than later,” Snyder said of potable tap water. “But it’s not based on time. It’s based on science, facts and caution to make sure we’re doing the right thing by the people of Flint.”

The $28 million in new funding will help pay for additional bottled water, childhood health assessments, nutritious school food, nurses and other services in Flint, where residents continue to suffer through a lead contamination crisis.

Every child in the city may have been affected by exposure to lead, and the state is treating it that way, Snyder said.

“A lot of work will be done to go back and look at what happened and why,” he said, “but the focus needs to be on re-establishing trust and getting so the water coming out of that tap is safe and clean again, and addressing the long-term health care issues for those people that have been damaged and adversely effected in some fashion.”

Snyder first discussed the prospects of drinkable tap water in Flint during an interview with Detroit News Editorial Page Editor Nolan Finley, who was a guest host on WJR-AM (760).

Keith Creagh, the interim director of the Michigan Department of Environmental Quality, made similar comments to Finley, saying the state wouldn’t recommend the use of the city’s tap water until outside experts like Virginia Tech’s Marc Edwards — now a water consultant for the city of Flint — also confirm the water is safe to drink.

The new state funding does not include money to replace underground lead services lines damaged after the city began using corrosive Flint River water in April 2014, but it does earmark $500,000 for outside experts to conduct an infrastructure integrity study.

There are probably between 15,000 and 25,000 Flint homes connected to the city’s water system via lead pipes, said Professor Martin Kaufman, chairman of the Earth and Resource Sciences Department at the University of Michigan-Flint.

“If our estimates are correct, whether or not a home has a lead pipe is largely correlated with the age of the structure,” Kaufman said Friday. “Almost all homes built before 1950 are likely to have a lead pipe, and 23,000 Flint homes were built before 1950.”

Kaufman’s team has contracted with the city to map out all known lead pipes in Flint, which will help officials understand the scope of the problem. It’s a time-consuming process because the city stored records on individual note cards and provided Kaufman with parcel maps through a series of 240 separate digital picture files. The mapping work should be done soon, he said.

“We hired a small army of workers to get this done as fast as possible, and we’re coming in under budget as well,” Kaufman said.

Creagh, in the Friday WJR interview with Finley, said he talked with U.S. Environmental Protection Agency lawyers for three-and-a-half hours Thursday about their recent directives to the state about Flint’s water. Last Friday, Creagh challenged the accuracy and legality of the EPA’s directives and requested a consultation that is allowed under federal law.

In his response letter to EPA Administrator Gina McCarthy’s Jan. 20 directives, the DEQ director emphasized that the state is willing to work with the EPA and Flint to solve the city’s lead-contaminated water, but it already has met all EPA demands.

“...To our knowledge, the State has complied with every recent demand made by the USEPA,” Creagh wrote.

The DEQ director said he went “paragraph by paragraph” with the EPA lawyers Thursday to help settle some issues.

He said the EPA was highly unrealistic when it insisted that the state map all of Flint’s lead pipe water connections within 10 days.

“There’s no precedent to handle this,” Virginia Tech’s Edwards told MSNBC’s Rachel Maddow at a Wednesday town hall in Flint. “The hurdles we face not just here but all across the country are that the records are so poor and records we do have are often wrong.”