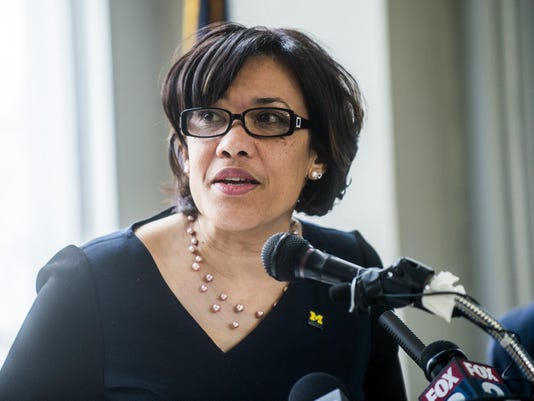 Flint Mayor Karen Weaver speaks during a news conference on Monday, Feb. 22, 2016, in Flint, Mich. Michigan Gov. Rick Snyder says 89 percent of water samples collected from key locations in Flint measured below the "action level" of 15 parts per billion for lead in an initial round of testing, but concerns remain. (Jake May/The Flint Journal-MLive.com via AP) LOCAL TELEVISION OUT; LOCAL INTERNET OUT; MANDATORY CREDIT(Photo: Jake May / AP)

Timothy Johnson, a retired deputy police chief with more than 30 years of law enforcement experience, was endorsed in a 6-3 vote to head Flint’s police force. Raymond Barton, a former assistant fire chief, was supported 8-1 to be the city’s next fire chief.

At the time, political observers said none of the departures seemed to be related to the city’s water crisis.

Hundreds of people attended Monday night’s meeting, with dozens of residents and police officers joining Johnson at the podium before council voted on his appointment to express support for him.

“It was an extremely good feeling,” Johnson said, according to a city news release. “I knew I had the support of the citizens. They will be proud of the police service they are about to get. I’m used to working with less.”

Barton also expressed gratitude for his appointment, according to the news release.

“I feel good. It shows the work I did in my 27-year-career with the Flint Fire Department didn’t go unnoticed,” he said.

Flint’s Receivership Transition Advisory Board, which reviews major financial and policy decisions under the terms of the city’s move out of state control last year, must now sign off on the appointments.

Weaver’s ouster of the three officials came just weeks after the board restored her powers to remove them.

Her first three months in office have been dominated by the water crisis.

Flint is under a public health emergency because its drinking water became tainted when the city switched from the Detroit system and began drawing from the Flint River in April 2014 to save money, at a time when a state-appointed emergency manager had final say.

Regulators failed to ensure that water was properly treated, and lead from aging pipes leached into the water supply. Some children’s blood has tested positive for lead, a potent neurotoxin linked to learning disabilities, lower IQ and behavioral problems.